Jeff Dunetz is a fellow patriot publisher, a fine writer, and, like all patriot publishers, including yours truly, an unwilling victim of the Silicon Valley demons, Facebook, Google, and Twitter (The Big Three).

Due to the dishonesty in the shamelessly liberal mainstream media, the landscape of American journalism was (and continues) shifting away from television and print news and towards online news and the refreshingly honest right-wing blogosphere.

We in the right-wing blogosphere have been persistently punished by Facebook, in particular. We have been restricted from posting to our own pages and groups, demonetized (Instant Article accounts terminated), had our traffic blocked from the newsfeeds of our followers, and even had our pages and groups deleted by Facebook for unexplained “violations of community standards,” Silicon Valley code for anything pro-traditional, pro-life, or pro-American.

There are NO First Amendment rights at Fascistbook! There is no freedom of speech or freedom of the press, both unalienable, God-given rights guaranteed in our Constitution. Many conservative bloggers have been forced out of business due directly to Facebook’s manipulation of their traffic. Patriot publishers, including myself, have paid many millions of dollars to Facebook to help build our respective brands and increase our traffic. While we were paying Facebook to increase our traffic, Facebook was busy choking off our traffic and destroying our brands.

On October 11, 2018, which has become known among patriot publishers as “The Purge,” Fascistbook deleted hundreds of pages and groups belonging to right-winger bloggers, including yours truly. Several of my pages were deleted, including Powdered Wig Society’s main page with over 300,000 followers. Thomas Madison was removed as admin of both of our Facebook groups, Powdered Wig Society and Swamp Drainers. Luckily, I had installed family members as alternate admins to maintain control of the groups in the event that I was removed, which, in fact, happened.

I attempted to start another Facebook page several months ago, which I was only able to do after meeting Facebook’s demand that I provide a photograph, which I did. That account, too, was deleted a few days ago for no particular reason that I can determine other than the fact that I am a patriot and conservative. I appealed to Facebook, only to be told again to provide a photograph of myself. So, I provided the same photograph. Not good enough. Facebook demanded a different photo. So, completely fed up with their bullshit, I sent them this one…. 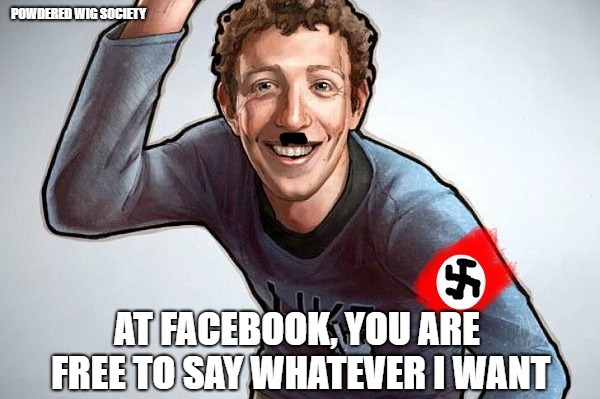 I haven’t heard back from them.

A little over four weeks ago,  Facebook cut off my group posting privileges. I was told it’s a temporary block for posting too fast, but unlike past times in the penalty box, they won’t tell me when it will be over.  One person from Facebook has been trying to help, he keeps thanking me for my patience and is trying to lift the ban, but he hasn’t been successful and can’t tell me when it will be over. Apparently, it’s confidential.  Every couple of days, I get unblocked for a few hours, but they end up blocking me again even when I spread out each post in each group by 20-25 minutes. screwed by facebook

Posting to groups is one of the ways I promote my posts, so as you would expect, my traffic is down.

This past week it got worse. When I try to post on the Lidblog Page, with 122K followers, I get the same message as above. Suspiciously I cannot be posting too fast on that site. The only posts I put up are promoting the articles on Lidblog, which generally means 3-5x a day. In other words, even though I have been assured it’s not true IMHO, I am being punished for BWC: Blogging while conservative.

While I am promoting the posts in other ways, including Twitter and Facebook alternatives, traffic is still significantly down, which means so is the income I make from ad revenue (my only income from this site).

This is how you can help.  When you come to this site and enjoy a particular post–please spread it around.  Post to your Facebook, or groups that you are in that is relevant to a specific post’s topic. If you are on Twitter, please share it with your audience, and if you have your own email list, please include your favorite post or posts from this site.

I will let everyone know if or when my Facebook exile is over. Until then, please help me to spread the word around.