Barack Hussein’s Executive Order 13603 is scary as hell! Check it out….

Scary as hell! Read Barack Hussein’s Executive Order 13603, and what Forbes has to say about it, below. Spot on!

Keep in mind this steaming pile of totalitarianism was written and signed by Barack Hussein during his first term. He can implement it any time he likes and seize total control of our entire economy, including control of all food, water, transportation, medicine, EVERYTHING! As if that is not enough, Hussein and his flying monkeys have full authority to implement forced labor upon all of us.

THIS is what Hussein is shoving down the throats of We the People, and what we have voluntarily permitted to be forced upon our children, who will inherit this painfully depressing tyranny.

Hopefully, November will bring new leadership (Hitlery is NOT new), and every executive order, presidential initiative, dictatorial directive, fascistic fiat, royal dictate and decree that Barack Hussein ever dreamed up will be repealed, and Hussein will fade away into history, unremembered except as an important lesson in why we should NEVER elect a tyrant. 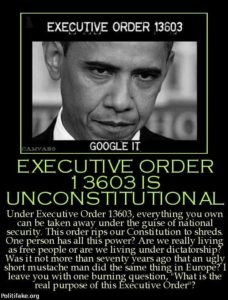 President Obama has made clear that he’s determined to continue pushing his “progressive” agenda, regardless of constitutional limitations on his power.  He aims to have his way by issuing more and more executive orders.

The most ominous sign of possible things to come appeared on March 16, 2012, when President Obama signedexecutive order 13603 about “National Defense Resources Preparedness.”

This 10-page document is a blueprint for a federal takeover of the economy that would dwarf the looming Obamacare takeover of the health insurance business.  Specifically, Obama’s plan involves seizing control of:

*  “All forms of civil transportation”

*  “All usable water from all sources”

Each government bureaucracy “shall act as necessary and appropriate.”

To be sure, much of this language has appeared in national security executive orders that previous presidents have issued periodically since the beginning of the Cold War.

But more than previous national security executive orders, Obama’s 13603 seems to describe a potentially totalitarian regime obsessed with control over everything.  Obama’s executive order makes no effort to justify the destruction of liberty, no effort to explain how amassing totalitarian control would enable government to deal effectively with cyber sabotage, suicide bombings, chemical warfare, nuclear missiles or other possible threats.  It’s quite likely there would be greater difficulty responding to threats, since totalitarian regimes suffer from economic chaos, colossal waste, massive corruption and bureaucratic infighting that are inevitable consequences of extreme centralization. Such problems plagued fascist Italy, Nazi Germany, the Soviet Union, communist China and other regimes.  Totalitarian control would probably trigger resistance movements and underground networks like those that developed in Western Europe during the Nazi occupation.  Totalitarian control could provoke more political turmoil than there was in the Vietnam War era of the 1960s.  There would probably be a serious brain drain as talented people with critical skills escaped to freedom wherever that might be.  Canada?

There’s nothing in executive order 13603 about upholding the Constitution or protecting civil liberties.

Obama’s executive order seems to assume that the next war will be like World War II or World War I, where vast armies of unskilled conscripts went at each other.  But current trends suggest that future conflicts are more likely to involve smaller numbers of military personnel – highly-trained professionals, perhaps thousands of miles away from a battlefield, who remotely-control drones, pilotless combat helicopters, unmanned ground vehicles, unmanned ships, mobile security robots and related military technologies.

Even if Obama’s 13603 were no different than previous national security executive orders, it’s more worrisome because it was issued by the president who rammed Obamacare and runaway spending bills through Congress, who racked up $5 trillion of debt and surrounded himself with hardcore “progressives” hostile to the private sector and America as we have known it.

In what circumstances, one might ask, would a president try to carry out this audacious plan?

Executive order 13603 says with ominous ambiguity: during “the full spectrum of emergencies.”

Well, the United States is already in a state of national emergency declared by President George W. Bush on September 14, 2001 and extended last year by President Obama.

To better understand the potentially explosive impact of his plan, let’s take a tour through the dark world of executive orders, a type of presidential power that most people know little, if anything, about.

Many presidents have pushed to expand their power beyond constitutional limits, particularly during crises.  Issuing executive orders is the easiest way to do it.  A president doesn’t have to propose an executive order, debate the issues, endure hearings or solicit votes.  An executive order can be issued in a few minutes — behind closed doors and away from bright lights.