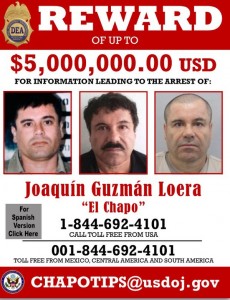 El Chapo, who cornered Chicago’s cocaine and heroin markets years ago, was recaptured Friday morning as Mexican organized crime officers and naval special forces troopers stormed a private home where he was hiding out.

The surprise assault in Los Mochis on the Gulf of California resulted in a firefight. One Mexican marine was wounded, five of the drug lord’s bodyguards were killed and six other el Chapo operatives were arrested along with the criminal leader himself.

That raid followed a citizen tip that el Chapo and his armed cadre were inside the home. Commandoes “were attacked with gunfire handgun from inside,” according to Mexican military officials.

Chapo – known as “Shorty” in English due to his squat stature – was armed to the teeth. Authorities say they recovered eight rifles, a handgun and a rocket launcher along with two armored vehicles. The arrest was announced in a tweet from Mexico President Enrique Pea Nieto: “Mission accomplished : we have it. I want to inform Mexicans Joaquin Guzman Loera has been arrested,” he stated in Spanish. In a subsequent tweet Nieto thanked the Security Cabinet of the Government of the Republic “for this important achievement for the rule of law in Mexico .”

Guzman is currently the lead defendant in a major drug prosecution in Chicago. He is also facing indictments in five other U.S. cities. There was a $5 million bounty on Guzman in handcuffs. Even though Chicago is considered by some in law enforcement as the strongest federal case, it is not certain that he will be tried here first.

It does seem certain that Guzman will be extradited to the United States, possibly Chicago. Under a Mexican court order signed last August, Mexican officials agreed to ship him back to the U.S. were he to be recaptured. Officials in Chicago and in the Eastern District of New York have both offered to host el Chapo’s return.

Guzman’s Sinaloa Cartel has a lock on the Chicago drug trade, responsible for 80% of the cocaine and heroin supply on the city’s streets, according to federal drug agents. Cartel operatives in Chicago have formed a solid, lucrative, distribution network with street gangs, law enforcement officials have said. That alliance is also believed to be at the root of many of Chicago’s street shootings and murders.

While the arrest of el Chapo on Friday may ease the sting from his prison break last summer-Chapo’s second in 15 years – the day’s events were not completely successful. Chapo’s top deputy in northern Sinaloa, Gastelum Orso Ivan Cruz, somehow managed to flee the scene and is a fugitive.