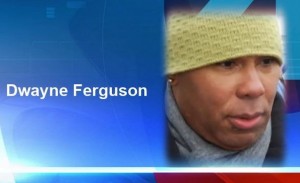 You just can’t make this stuff up!

Liberal hypocrisy has reached the comedic level, if in fact you can find anything at all funny about a liberal hypocrite gun control activist arrested on school grounds for carrying a gun. The real comedy is his response to the incident, exceeded in knee-slapping value only by the judge’s sentence of 100 hours of community service for what were initially two felony charges.

In February Dwayne Ferguson of Buffalo, NY was arrested at Harvey Austin Elementary School after an army of police officers, including SWAT and K9 stormed the school. When asked by officers if he was carrying a gun, he lied, continuing the lie by telling a News4 TV reporter, “No police officer axed me at all about did I have a gun with a permit.” When asked if knew what was happening, Ferguson replied, “No. I axed them what the man, the young man have on, what is a man wear.”

When asked by the reporter whether or not he knew it was a crime to carry a gun onto school grounds, Ferguson responded, “I wasn’t aware of that at that time in point.” He continued, and this is really funny, if you appreciate sick, bizarre, twisted, truth-is-stranger-than-fiction comedy: “I just came from a funeral at that time. That’s all it was.”

OK, let me get this straight – An ardent gun control activist, from one of the most tyrannical, anti-Second Amendment states in the union, who believes that the government should keep guns out of the hands of honest, law-abiding citizens, is arrested and charged with two felonies for carrying a gun into the most sacred of sacred gun-free zones, a public school. He lies to police about having a gun, excuses his own gun-toting transgression, explaining that he was just coming from a funeral, where obviously a loaded gun is always needed, forgetting that he actually has a loaded gun on his person, taking it to the school to  mentor disadvantaged young men. Is that about right?

I’m sure that many yucks were shared in the courtroom over Mr. Ferguson’s close call with prison and pending induction into the Irony Hall of Fame. I’m equally certain that Mr. Ferguson now understands that mentoring disadvantaged men should take place at a proper venue, like a shooting range.

From The Daily Caller:

Back in February, a Buffalo, N.Y. community activist who pushed for a highly restrictive 2013 gun control law was arrested for — wait for it — carrying a gun illegally at a public elementary school.

The wheels of criminal justice have now slowly, slowly churned to completion. And wouldn’t you know it? The judge in the case has now found it in his heart to give the heat-packing activist, Dwayne Ferguson, a generously light sentence.

If Ferguson completes the service requirements and stays out of trouble, he won’t have to answer for the substantially more serious charge initially levied against him: Possessing a firearm on schools grounds. (He initially was looking at two felony charges of criminal gun possession.)