Donald Trump may have the Republican presidential nomination sewed up by March 15, after the Florida primary

Donald Trump leads Marco Rubio by a seemingly insurmountable 16 points in the latest Florida GOP presidential poll, which is significant for four reasons:

Unless Donald Trump body slams a nun in a busy intersection on national TV sometime in the very near future, he is going to do at least very well on Super Tuesday, March 1. Florida (March 15) could put him so comfortably ahead, it will be practically impossible for any candidate to catch him. 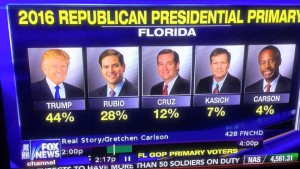 From Jonathan Easley, The Hill

Republican presidential candidate Donald Trump is crushing the field in Florida, a critical winner-take-all state that could seal the deal for the GOP front-runner on March 15.

Marco Rubio, who represents Florida in the Senate, follows with 28 percent. Rounding out the field are Ted Cruz, at 12 percent; John Kasich, at 7 percent; and Ben Carson, at 4 percent.
This is the first survey of Florida since the state’s former governor, Jeb Bush, dropped out of the race, and it shows Trump has only grown his lead as the field has winnowed.

“If Sen. Rubio can’t win in his own home state, it is difficult to see how he can win elsewhere,” Quinnipiac polling director Peter Brown said.

Political watchers say that if Trump builds a comfortable delegate lead after Super Tuesday next week, as he’s expected to, victories in Florida and Ohio could make it impossible for any of the other candidates to catch him in the race.

Still, the poll raised one red flag for Trump.

Florida only allows registered Republicans to vote in the state’s primary, provoking Brown to wonder “whether the flood of new voters Donald Trump seemed to bring to earlier contests will be able to participate.”

But Trump’s lead in Florida is so thorough, it would take a total collapse for someone to catch him there.

“He leads in every age group by 9 to 19 percentage points,” Brown said.

“Despite being a New York multi-billionaire, he leads among those who identify with the Tea Party. He also does twice as well among white evangelicals as does Sen. Ted Cruz, who is trying to make this his core constituency.”

On the economy, which most Florida Republicans called the top issue in the election, Trump leads Rubio 51 percent to 28 percent.