No tears for the newly-departed Kayla Mueller, the ISIS hostage whose parents confirmed today that she is dead. Mueller was a Jew-hating, anti-Israel piece of crap who worked with HAMAS and helped Palestinians harass Israeli soldiers and block them from doingtheir job of keeping Islamic terrorists out of Israel. She also worked to prevent Israel from tearing down terrorists’ “houses,” which the Palestinian terrorists used to smuggle weapons from and to HAMAS in order to perpetrate terrorist attacks. And she wrote several lying, anti-Israel blog posts. 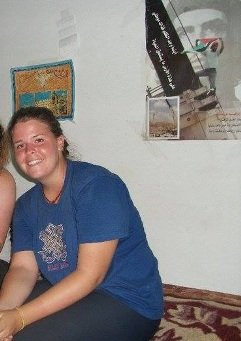 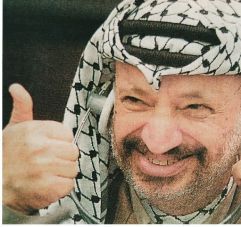 Kayla Mueller @ ISM Palestinian Terrorist Headquarters
As I noted last week and many other times on this site, I have no sympathy for any of these “American” (in name only!) hostages of ISIS. And my attitude when I hear they’ve been snuffed out is, so sad, too bad. Every single one of these hostages has been a leftist America-hater. They are anti-American “journalists” there to tell us how “moderate” and “democratic” these beheaders and live-human-burners are. Or they are anti-American “aid workers” (that’s like the Middle East version of Barack Obama’s “community organizer”).

This latter category describes Kayla Mueller, who went to Israel and the so-called “West Bank” and Gaza to help HAMASnik Jew-haters. From the International Solidarity Movement (ISM), a terrorist group that aided and abetted Al-Qaeda, HAMAS, Islamic Jihad, and Al-Aqsa Martyrs Brigade terrorists (including two British Muslims who blew up “Mike’s Bar” in Tel Aviv):

Abdullah Abu Rahma, coordinator of the popular committee in the village of Bil’in where Kayla joined the protests, told ISM: “Kayla came to Palestine to stand in solidarity with us. She marched with us and faced the military that occupies our land side by side with us. For this, Kayla will always live in our hearts. We send all our support to her family and will continue, like Kayla, to work against injustice wherever it is.” . . .

With the ISM, Kayla worked with Palestinians . . . resisting the confiscation and demolitions of their homes and lands. In the Sheikh Jarrah neighborhood of Occupied East Jerusalem, she stayed with the Al Kurd family to try and prevent the takeover of their home by Israeli settlers.

Mueller also praised Palestinians who attacked Israelis with rocks and said she marched “arm in arm” with them and supported their violence.

So, it’s poetic justice that Mueller spent her last months as a hostage of the Islamic terrorists with whom she thought she had some sort of kinship and sisterhood. And that she died in their hands.