In a word, BIZARRE! That’s my take from last night’s Democrat presidential debate, aka The Hillary Clinton Show.

Hitlery, and her shrill scream, dominated the debate, and it appeared that CNN was promoting that domination, giving her an excessive amount of extra time on every question, and multiple opportunities to respond to other candidates’ statements. Totally unfair!

How the hell Hitlery’s opponents allowed her to evade the Benghazi and email issues is beyond comprehension. She should be, and will be in the future, fried over these two issues.

Highlight of the debate: Excusing Hitlery’s email embarrassment, Bernie Sanders declared, “The American people are and sick and tired of hearing about ya’ damned emails!” In other words, national security is not at all important.

A quick look at the individual performances….

Jim Webb: He of the perpetual scowl. Appearing as stiff and uncomfortable as well, an ex-Marine, Webb snarled and smirked his staccato responses. A proud graduate of the esteemed John McCain Capitol Hill Fashion Academy, Webb proudly, if uncomfortably, wore a shirt with the neck measurement three sizes too small. I thought his head was going to explode. No wonder he and McCain are always so angry!

Note to Jim: Buy shirts with neck measurements three sizes too large, not three sizes too small. You will be amazed at how pleasant the world becomes. Who knows, you may even smile one day.

Lincoln Chaffee: Really? What the hell was he doing there? His most memorable moment (there were actually two of them) was when he apologized profusely for his congressional voting record.

Note to Chaffee: Liberal Rule #437 – never apologize! It is the same as pleading guilty, and a surefire way to waste lots of time and money pursuing a position you are too guilty to occupy. Suspend your campaign today, place all of your money in the toilet and pull the handle. A huge time saver.

Martin O’Malley: Really? What the hell was he also doing there? He and Chaffee should have been separated in the lineup. They actually looked like twins onstage. Very distracting. Like Chaffee, O’Malley should immediately employ the abort button, otherwise known as the “commode activator lever.”

Most memorable moment: bitching on multiple occasions about not getting enough face time. Get in line, O’Malley, this is the Hillary Clinton Coronation Show, not the MOM Show.

Bernie Sanders: Even though I kept confusing Bernie with the dazed Doc Brown from Back To The Future, constantly losing track of which generation we were being warped into next, I thought Bernie won the debate. He made far better use of his time than Hitlery. His most memorable moment came when he declared, concerning the Secretary of State’s embarrassing email scandal, “The American people are and sick and tired of hearing about ya’ damned emails!”

So, there, bitch! I’m not sure where Bernie got permission to invoke “The American people.” I’m an American people and I haven’t heard enough about Hitlery’s “unsecured” emails yet, especially those that contained very sensitive and classified information, like exact US troop and equipment locations overseas. Nonetheless, the statement brought a mass squeal of approval from the audience and provoked one of those signature spontaneous and uncomfortable episodes of high-decibel howling laughter from Monica Lewinsky’s boyfriend’s wife. She was high-fiving and jiving with glee!

Nice save, Bernie. There is a Vermont farm with your name on it. Forget that it is deeded to the Clinton Foundation. It is yours as long as you play Hitlery’s Ed McMahon. 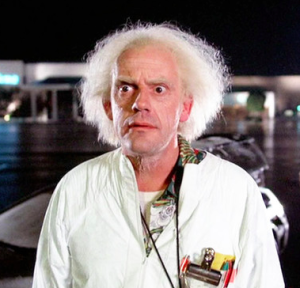 Note to Bernie: Socialism is dead. Don’t take my word for it, just ask the Russians.

Hitlery Bobblehead Clinton: No Democrat presidential debate would be complete without the constantly distracting and uncomfortably slow cadence of Hitlery bobbing for apples. Her handlers should consider installing a couple of those Frankenstein-type bolts in her neck to stop this annoying nervous tic.

Donald Trump labeled the tame treatment Hitlery received from her fellow candidates as “gentle.” No doubt. Bernie Sanders was practically licking her cankles.

Hitlery’s most memorable moments were the multiple times the control room geek laid on the “APPLAUSE” button, provoking repeated howling shrieks from the female-dominated audience at every excessively shrill Hitlery response.

Hitlery’s next command performance will be next week on the Trey Gowdy Show. You should tune in, Bernie. You will learn a thing or two about the hazards of sending high level classified communications over an unsecured email network.

General note: It was awesome hearing all of the presidential hopefuls repeatedly giving the store away, promising this federal program and that pandering freebie, with never a mention of how said giveaways would be paid for. There is no such thing as a free lunch, folks. Someone, somewhere, paid for it!