Speaker of the House, Madam Batshit Crazy, is calling for a special meeting of her Democrat caucus Wednesday morning, the topic of which will be the impeachment of President Trump.

Apparently, Batshit Crazy’s troops are becoming a bit impatient with her for not pushing for the president’s impeachment 24/7.

Of course, we all know, as Robert Mueller spent two years and $30 million confirming, there is no impeachable offense with which to charge President Trump. But, that won’t stop the brain-dead leftists on Capitol Hill from trying. Nor, will it stop their foaming-at-the-mouth sycophants across flyover country from cheering their legislators on.

The Democrats are all fascists, and nothing less, believing that you can remove anyone you don’t like or agree with, from any position, for any reason, or no reason at all. There is no method of removal they do not support fully, as can be seen on any given day when they applaud the wholesale butchering of the most defenseless among us, the unborn, and now, in the most evil of places, those about to be born, struggling for their first breath. These people are demons. They are not human, and tomorrow morning their target is the finest patriot to occupy the White House since John Adams (I would include Washington, but he never occupied the White House, although he did oversee its construction).

How is it possible for the Democrats to have even a single follower? Are there truly tens of millions of people in America who are that blind and hopelessly stupid? Or, is the number much smaller, like a few million academic pinheads, plastic Hollywood burnouts, out-of-touch media geeks, and on-the-take politicians, and it just seems like tens of millions because the liberal mainstream media is dishonest, as are the pollsters, and election fraud makes it all seem so real?

The latter, I believe, is much more likely the tragic reality.

House Speaker Nancy Pelosi, facing a revolt from members of her caucus, has been compelled to hold a closed-door meeting Wednesday morning to deal with new pressure to go forward with an impeachment inquiry of President Donald Trump.@abcnews @SpeakerPelosi #StartTheProcess

@SpeakerPelosi We are with you and support the effort to #ImpeachTrumpPenceNOW

Impeaching for no reason is like a cop telling you, "I'm charging you with crime." You ask, "What crime?" He replies, "Shut up! Just crime, alright? Hands behind your back NOW!" Fascist liberal dream world, I know, but the real world doesn't work that way, you fucking imbeciles!

THIS is how real Nancy Pelosi is. Watch the following video and tell me that there is even a single person on the planet who considers Madam Batshit Crazy even remotely close to genuine and honest. Be sure to watch the end of the video as a reporter quizzes Pelosi, exposing her dishonesty in public.

And, of course, Dennis Miller, describing Madam Batshit Crazy as only he can…. 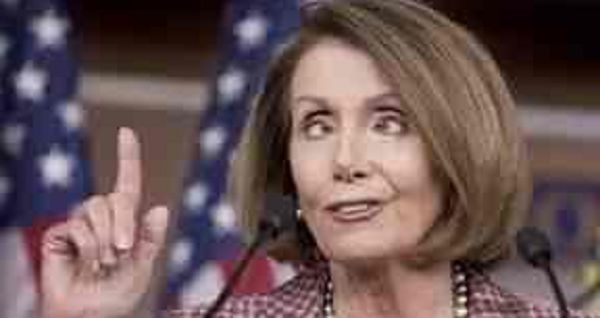 What is Nancy Pelosi saying at the 1:04 mark in this video…. https://www.youtube.com/watch?time_continue=65&v=eSko2ixEB8U
Created with Poll Maker