Please, if you are black, or even if you are not, read this! It is the most accurate depiction of the Democrat Party you will see today

Photo, above: Edmund Pettus, Civil War General, Ku Klux Klan Grand Dragon, US Senator from Alabama, and namesake of the bridge that has become a civil rights landmark

I found this old advertisement from the Democrat Party seeking fellow racists to join them in their crusade for “white supremacy.” It brought to mind the incredibly successful sales job the Democrat Party has pulled off with black Americans, convincing them that Republicans are the racists.

It worked! Democrats enjoy massive support among African-Americans, despite a well-concealed history of oppression of blacks. Go figure!

So, to all of my black brothers and sisters, I would like to draw your attention to the following photo. It is a snapshot of the Democrat Party you support in large numbers. 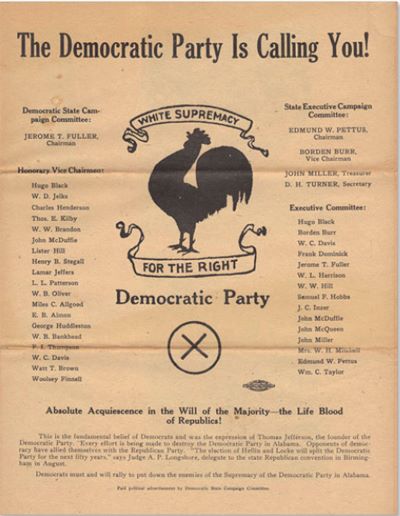 I did a quick search of three names on the poster – Jerome T. Fuller (couldn’t find much on him), Edmund Pettus, and Hugo Black.

I recognized Black immediately as the name of a Supreme Court Justice. Pettus’ name was familiar but I wasn’t sure why.

Here is what I found….

Hugo Black was one of the most influential Supreme Court justices in the history of the United States. He was also a proud Democrat, a US Senator from Alabama, and a Ku Klux Klan member.

Edmund Pettus, another proud Democrat, listed on the poster as the Chairman of the Democrat Party State Executive Campaign Committee, was also a US Senator from Alabama. In addition, he was a hardcore racist, Confederate Civil War general, and Ku Klux Klan Grand Dragon.

So, my question is when will blacks see the Democrat Party for what they truly are, a divisive, racist group, hell-bent on pitting blacks against whites in an effort to promote class division, their only hope in their mission to maintain power and relevancy.

They may have been generations apart, but both Frederick Douglass and Martin Luther King knew the Democrat Party well, which is why they were both Republicans, as were the first black members of the United States Congress. Not until the 1960s were the Democrats able to lure the black community onto the liberal plantation of government dependency.

If blacks were to abandon the corrupt, racist Democrat Party and get behind the Trump agenda, there is no question that racial unity and harmony would finally be realized, as well as a renewed pride and prosperity in the black community. It wouldn’t happen overnight, but it would happen. We are all in this together!

The Biggest Loser
May 12th, 2021 Flag And Cross
Contact us