Warning: Beware of Cruzbots posting fake Pennsylvania delegate lists on Twitter. How much lower can The Canadian and his flying monkeys sink?

THIS is the real list (below). Watch for vampire lists planted by Canadian Cruz and his Flying Monkey Show.

Trending: The real John McCain. “33 POWs faced execution for treason after Vietnam until Nixon pardoned all POWs.” McCain was #1 on the list 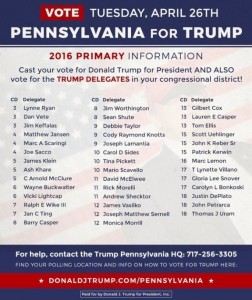 Be careful of Cruz vampires putting fake lists up. This comes from #Trump website. Check Hannity website too. https://t.co/7iAcQ3nfIC