The Colorado surprise continues its backfire. As we predicted, Canadian Cruz is collapsing in the polls, while Donald Trump is surging

The most respected polling organization among political pundits is unquestionably Real Clear Politics (RCP). Their latest polling data is showing an expected spike in Donald Trump’s poll numbers, and an equally expected nosedive in Canadian Cruz’s poll numbers, which we predicted as a result of the Colorado disenfranchisement and manipulation of delegate selection.

In this latest poll from RCP, note in the graphic the direction of Trump’s and Cruz’s most recent trajectory, Trump climbing rapidly, while Lying, Cheating Ted is tanking. John Kasich now leads the Canadian nationally and in three of the four upcoming states, as shown in the graphic, below. I’m not sure how RCP calculated 400 delegates at stake in the next two weeks. I counted 267.

We predicted this phenomenon would take place as a backlash against the Colorado injustice, which has now been repeated in Wyoming, where Cruz was given all 14 delegates without the benefit of a vote by the people.

The Cruzbots are clamoring, “But, but, but, those are the rules. Cruz can’t help it if he benefitted from the rules.” Right, Cruzbots, and it’s a “rule” in Iran that you can execute a woman, including your daughter, for the crime of being raped. You are approving of a corrupt scheme to steal an election. Unjust rules have no place in a free society, which the United States used to be, and notwithstanding morons like you, will be again! 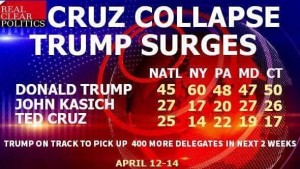