VIDEO: Of Donald Trump’s locker room bravado crazy Uncle Touchyfeely boasts that “I wish we were in high school and I could take him behind the gym!”

Wow! Who knew crazy Uncle Touchyfeely was such a badass? In the video, below, he claims, in an artificially indignant rant, and with standard and morally superior Democrat disingenuousness, that he wishes he could whip Trump’s ass for suggesting that he would do to women what our crazy uncle actually does to women…. in public!

Donald Trump’s suggestion that he would touch women in a place that would embarrass them is easily trumped, if you will, by crazy Uncle Touchyfeely’s actual touching of women in ways so forward that they are publicly and visibly shocked and embarrassed. I haven’t witnessed Uncle Touchyfeely going below the belt yet, but I’m sure that’s because he understands his public limitations. I can only imagine what he does when there are no cameras or witnesses around.

You have to admit that it is going to be very different at White House parties after the Trump inauguration. I just don’t see Mike Pence standing nude in the punchbowl wearing a lampshade on his head. And you, Uncle Touchyfeely, had better watch what you wish for (video below, followed by more pics of Uncle Touchyfeely). 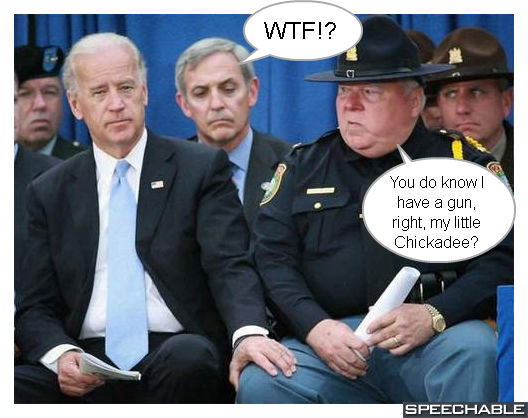 Cartoon of the Day: Welcome to the Club
May 9th, 2021 Conservative Firing Line