Horrible development! Clive Bundy has been arrested and jailed in Oregon, where two of his sons are also jailed and awaiting trial

Photo, above: Clive Bundy’s mugshot after being arrested in Oregon. Does this kindly old grandpa dude look like a terrorist to you?

No matter what side of this tragedy you are on it is a horrible development when federal authorities arrest those protesting to seek justice for others.

Such is the case of the Bundy brothers, Ammon and Ryan, who were protesting the imprisonment of fellow ranchers, Dwight and Steven Hammonds, who were jailed for setting a fire on their property that went out of control and burned over 100 acres of adjacent federal land.

The Hammonds were tried in federal court in 2012, convicted, and sentenced to three months in jail for the father, and one year for the son. After completing their sentences they returned home to peacefully raise cattle. They were sentenced under the federal Antiterrorism and Effective Death Penalty Act of 1996, which carries a mandatory sentence of five years.

Not happy with these less than mandatory sentences, the US attorney for Oregon, Amanda Marshall, challenged the sentences in federal court, claiming that the sentencing judge imposed “an unlawful sentence.” She won, and the Hammonds were ordered to complete the remainder of their respective mandatory five-year sentences under the Antiterrorism Act.

Egregiously wrong, at best! Beneath the article, below, on the arrest of Cliven Bundy, is a report, also from The Oregonian, detailing the background of the Hammond case.

There is no question that the federal government has gotten too big for its britches. The question is, “how and when will it stop, and will it do so peacefully?”

Cliven Bundy, the Nevada rancher who touched off one armed showdown with federal authorities and applauded another started in Oregon by his sons, was arrested late Wednesday at Portland International Airport and faces federal charges related to the 2014 standoff at his ranch.

He faces a conspiracy charge to interfere with a federal officer — the same charge lodged against two of his sons, Ammon and Ryan, for their role in the Jan. 2 takeover of the Malheur National Wildlife Refuge in Burns. He also faces weapons charges.

The Bundy Ranch Facebook page reported Cliven Bundy was surrounded by SWAT officers and detained after his arrival from Nevada.

The Bundy patriarch had traveled to Portland with plans to go on to Burns, where four occupiers had been the remaining holdouts of the refuge occupation.

Bundy has been under federal scrutiny since his ranch standoff with the U.S. Bureau of Land Management. He has not paid grazing fees on federal land and he owes the agency $1 million in unpaid fees and penalties. He and militia supporters confronted federal agents who had impounded Bundy’s cattle that were found on federal property.

Some of the key participants in that standoff helped orchestrate the wildlife refuge occupation, including Ammon and Ryan Bundy. They are both in custody in Portland.

Another key participant in the Nevada showdown was Ryan Payne, a Montana militiaman who helped organize militia snipers to take aim at federal agents in Nevada. Payne is considered the tactician behind the Oregon takeover and also has been arrested and faces a federal conspiracy charge.

The Bundy brothers and Payne said they took over the federal bird sanctuary to protest the imprisonment of two Burns area ranchers and federal land ownership. They were arrested along with several others Jan. 26 as they traveled to a meeting in a neighboring county.

Occupation spokesman Robert “LaVoy” Finicum was shot and killed by state police at the stop. He was carrying a loaded 9mm handgun and refused to follow police commands, the FBI said.

The last four occupiers, who have camped alone since Jan. 28 at the headquarters compound, agreed Wednesday night to surrender in the morning. They did so after FBI tactical teams infiltrated refuge buildings undetected overnight Tuesday and into Wednesday. The FBI then hemmed in the occupiers with armored vehicles and negotiated with them for five hours to reach the surrender agreement.

Ammon Bundy’s lawyer, Mike Arnold, said Cliven Bundy was considering joining Nevada Assemblywoman Michele Fiore at a news conference that had been planned Thursday morning in Portland to talk about the refuge takeover. Almost immediately after she arrived in Portland, Fiore started talking to the last occupiers by phone and left in a car for the six-hour drive to Burns to help work out their surrender.

“It’s terribly unfortunate the timing of his arrest, given all the progress Assemblywoman Fiore made this evening,” Arnold said, referring to Fiore’s intervention on behalf of the holdhouts.

Arnold urged the four remaining occupiers to find some good in it. “He was arrested without incident and without violence,” the lawyer said. “That should give them comfort in their decision tomorrow.” 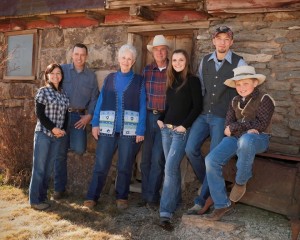 Photo, above: Members of the Hammond family post outside a ranch building on their property in Harney County in this undated photo. Steven Hammond, second from left, and his father, Dwight Hammond Jr., center, are due to report to federal prison on Monday, Jan. 4, 2016, to serve additional time for their conviction for arson. Don’t they look like terrorists?

When the men were indicted in 2010 on federal arson charges, they faced sentencing under the federal Antiterrorism and Effective Death Penalty Act of 1996. Some Hammond backers and a host of recent social media posts translated that to mean the Hammonds were treated as terrorists.

“When you start bringing in the terrorism act for God-fearing livestock producers in eastern Oregon, something is wrong,” said Barry Bushue, a Multnomah County berry farmer and president of the Oregon Farm Bureau.

Federal prosecutors say they did no such thing.

“At no time have I ever called these two men terrorists. Never,” Papagni, the federal prosecutor, said in court last October. “They committed arson.”

But the five-year sentence mandated by terrorism law also concerned people. Among the critics: the federal judge who presided over the Hammonds’ trial in Pendleton.

U.S. District Judge Michael Hogan said at the men’s original sentencing in 2012 that such a term would be unconstitutional as cruel and unusual punishment.

“It would be a sentence which would shock the conscience,” Hogan said before sentencing Dwight to three months and Steve to one year.

The men served their time and went home to raise cattle. But their case, it turned out, was far from settled.

“If the government stands by and doesn’t pursue the statutorily mandated sentence in this case, what kind of precedent does that set?” Marshall asked. Hogan, she said, imposed “an unlawful sentence.”

Papagni, the federal prosecutor, said in court last fall that “the government did what we are supposed to do when someone doesn’t follow the law, be it a judge or be it two ranchers in eastern Oregon.”

The solicitor general at the U.S. Justice Department authorized a rare appeal of an Oregon judge’s order.

The appeals court sided with the prosecution, and the Hammonds trooped to federal court last October to face a second sentencing.

“I have nothing to say,” Steve Hammond said.

“I have got nothing to say,” Dwight Hammond said.

She sentenced them to prison to finish five-year terms but left them free until after the holidays.

The Hammonds’ pending return trip to prison deeply troubles ranchers and others.

“There’s nobody in history who has gone to federal prison for burning a few acres of public property,” said Melodi Molt, a Harney County rancher and former president of Oregon CattleWomen. “It’s not right.”

The Oregon Farm Bureau said the second prison term is “gross government overreach and the public should be outraged.”

And then there is what some locals see as a government land grab.

The Hammonds in late 2014 agreed to pay the federal government $400,000 to settle a lawsuit seeking to force them to pay more than a $1 million in costs for fighting fires they set. The Hammonds paid $200,000 right away and paid the rest Thursday.

The settlement also required the Hammonds to give the land bureau first chance at buying a particular ranch parcel adjacent to public land if they intended to sell. For some, this was evidence that the government all along was after the Hammond ground to add to its Steens Mountain holdings.

“One thing that upsets cattle people is that provision,” said Bob Skinner, a Jordan Valley rancher representing the Oregon Cattlemen’s Association. But federal attorneys said the land provision was inserted in case the Hammonds felt they had to sell ranchland to pay the settlement. The Hammonds apparently won’t face that prospect because they intend to pay the balance.

As the men pack for prison, the family faces challenges to keep the cattle business going.

The federal land bureau last year decided not to renew grazing permits because of the criminal convictions. A Boise lawyer appealing the decision said the loss will strain the ranch.

Molt said ranchers are ready to support the Hammond outfit.

“All they have to do is call on community members if they need help,” said Molt.

But at this point only President Obama can spare the Hammonds from serving their full sentence. A pardon isn’t expected, and clemency takes years to process.

“I hope the president looks as kindly on community members as he does with drug offenders,” Bushue said.