My favorite 12-year old patriot, CJ Pearson, and his family, have received death threats from an Obama-loving piece of dung!

I am proud to be a facebook friend of 12-year old conservative patriot, CJ Pearson, whose youtube videos have been a viral sensation. He posted to facebook Friday that he is taking a break (hopefully a short one) as he and his family have received death threats from a liberal hater.

CJ posted, “After much thought and consideration, I’ve decided to take a break from politics and political commentary. I had a horribly rough night on Twitter after a woman not only threatened to sue me for expressing my opinions but threatened my family. At this point, I’ve decided that it’s best for me to take a step back and evaluate all of my options before continuing down this path. In the meantime, I do have a team that will be monitoring my social networks while I take some time to spend with my family. Please keep me in your prayers.”

Among the threatening tweets CJ has received from the odious liberal, who goes by the twitter handle of Mona Hussein Obama, are the following: 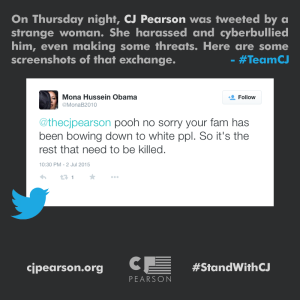 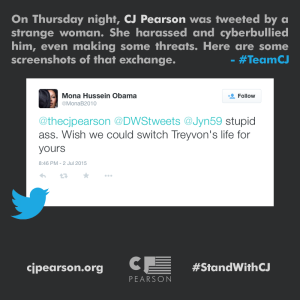 According to Examiner, “Apparently, abuse is what she had in mind Thursday night. In one tweet, she told Pearson: “[A]ll your supporters are RWNJs … Racist Teabagger southern cons. I pray your fam is next to be killed.”

In another tweet, she told Pearson that the GOP needed to “denounce” him if he wasn’t an official. “Otherwise,” Obama said, “we go for the lawsuit.” She also told Pearson she would file a lawsuit on Tuesday.

A search of Twitter found three accounts using the name “Mona Hussein Obama.” One account uses the name @MonaB2011 and claims to belong to a progressive, socialist, former Republican. The third account uses the name @racistmona and as of this writing, had only one profane tweet. It is unknown if the accounts are related. Moreover, Twitter’s rules and federal law strictly forbid online threats.

Thousands extended their support to Pearson and encouraged him to stand strong. “God Bless you and your family CJ..your an inspiration to many and we all look forward to hearing from you in the future,” one person said. “We need you CJ. Please don’t let one crazy person (destroy) that.”

Hatred and threats are nothing new for conservatives who dare to speak out. As we have reported many times, conservatives are often targeted with death threats and death wishes from angry liberals seeking to silence any dissent. Age, unfortunately, is no barrier. In 2012, for example, liberals wished death on a six-year-old after a pro-Romney video went viral.

In February 2011, we first said that liberalism, at its core, is an ideology of rage and hate. Unfortunately, liberals like “Mona Hussein Obama” prove that assertion correct on just about any given day.”

Below is CJ’s first youtube video, which shot him to fame, presently with nearly 2 million views. There are now over 20 CJ Pearson videos. As with all conservative sensations, the leftist sewer dwellers do all they can to silence them, stopping at nothing, including death threats.

God Bless you and your family, CJ. May you be back soon. America needs your voice.