While leftist lamebrains and Muslim apologists are busy explaining the Chattanooga massacre as yet another isolated incident, I have to wonder how many “isolated incidents” it takes for liberals to see a trend. A few of the most mentally deficient rationalize it as an understandable and justifiable reaction to American Islamophobia. And no progressive worth his kumbaya is neglecting the opportunity to scream gun control. “It’s an isolated incident,” they say. “Islam is a religion of peace,” they say. “Confiscate all guns,” they say.

Hey, I have an idea! Why don’t we allow our servicemen to carry the weapons they are superbly trained to handle? That way they can snuff a cockroach like Abdulazeez before he has caused so much mayhem and misery. Naaaaaah, what am I thinking?! What fun is that? Let them be sitting ducks. Maybe we should change the regulation uniform to include a jacket with a big red bullseye.

In a text to his closest friend, Chattanooga mass murderer, Mohammad Abdulazeez, relayed a verse from the holy hadith, the Hadith Qudsi, in which Muhammad quotes Allah, “Whosoever shows enmity to a friend of Mine, then I have declared war against him.”

The last official word I heard from law enforcement authorities on site in Chattanooga is that they have no reason to believe that Abdulazeez was motivated by Islamic fundamentalism or religious fanaticism. Really? Having a little trouble connecting those dots, huh, Sherlock?

CHATTANOOGA, Tenn. (Reuters) – Hours before the Tennessee shooting that killed five U.S. servicemen, the suspected gunman texted his close friend a link to a long Islamic verse that included the line: “Whosoever shows enmity to a friend of Mine, then I have declared war against him.”

His friend thought nothing of it at the time, but now wonders if it was a clue to Thursday’s rampage in Chattanooga, which has re-ignited concerns about the radicalization of young Muslim men.

“I didn’t see it as a hint at the time, but it may have been his way of telling me something,” the friend told Reuters on Saturday. He requested anonymity for fear of a backlash.

The suspect, Mohammod Youssuf Abdulazeez, a 24-year-old Kuwaiti-born naturalized U.S. citizen, was killed in a gunfight with police. The FBI is investigating the attack as an act of terrorism, but said it was premature to speculate on the gunman’s motive.

While a firm connection between the suspect and radical Islam has not been established, the shooting follows a series of attacks or thwarted attacks in the United States and other countries by Muslims claiming to be inspired by Islamic State or other militant groups. 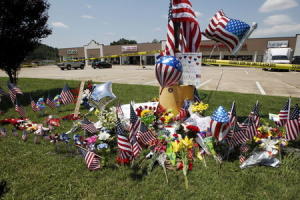 Items left at a memorial at the Armed Forces Career Center are seen in Chattanooga, Tennessee July 1 …

Abdulazeez’s friends said he had returned from a trip to Jordan in 2014 concerned about conflicts in the Middle East and the reluctance of the United States and other countries to intervene.

He later purchased three assault rifles on an online marketplace and used them for target practice, the friends said.

“That trip was eye-opening for him. He learned a lot about the traditions and culture of the Middle East,” said the close friend who received the text message.

Abdulazeez was upset about the 2014 Israeli bombing campaign in Gaza and the civil war in Syria, he said. “He felt Jordan, Qatar, Saudi Arabia were not doing enough to help, and that they were heavily influenced by the United States.”

Another friend said, “He had always talked about it, but I’d say his level of understanding and awareness really rose after he came back.”