Unlike Baltimore and Ferguson, blacks and whites come together to mourn in Charleston. The horrifying tragedy in pictures

Photo, above: Blacks and whites worship together during a memorial service at Morris Brown AME Church on Wednesday

Race-hate ‘killer’ wanted to start a civil war: Pill-popping suspect admits planning attack for SIX MONTHS – but he ‘almost backed out when the black church-goers he murdered were so nice to him’

Excerpted from an article by Lydia Warren and Mia De Graaf, Daily Mail

Dylann Storm Roof has confessed to entering a South Carolina church on Wednesday night and shooting dead nine people at their weekly bible study meeting, telling investigators that he wanted to ‘start a race war’, according to reports.

The 21-year-old admitted to Charleston police and the FBI that he was behind the massacre, law enforcement officials told CNN on Friday. But he also revealed that he ‘almost didn’t go through with it because everyone was so nice to him’, sources told NBC News.

But he ultimately decided that he had to ‘go through with his mission’.

His roommate has since revealed that Roof, who is white, had been planning the attack for six months, and had wanted to start a ‘civil war’ before killing himself. Another friend has said that Roof complained that black people are ‘taking over the world’ and said someone to do something about it for the sake of ‘the white race’.

On Thursday, following an overnight manhunt, Roof was arrested in Shelby, North Carolina after a tip from a member of the public and he was extradited back to South Carolina last night.

He was seen in a jumpsuit, chains, handcuffs and a bullet-proof vest as he was chaperoned by dozens of armed police officers on to an airplane at Shelby-Cleveland County Regional Airport bound for his home state.

He is now on suicide watch in jail, as per protocol, Charleston County Sheriff’s office spokesman Major Eric Watson told ABC News. He is being housed separately from the rest of the inmates for his own safety.

A bail hearing has been set for 2pm today. He will be charged with with nine counts of murder and possession of a firearm during the commission of a violent crime, according to Charleston police. He will be represented by a public defender. 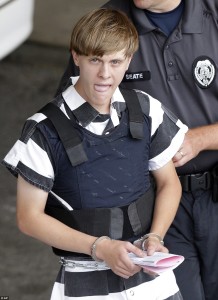 Baby-faced ‘killer’: Dylann Storm Roof held court papers in his cuffed hands as a police officer held him by a chain 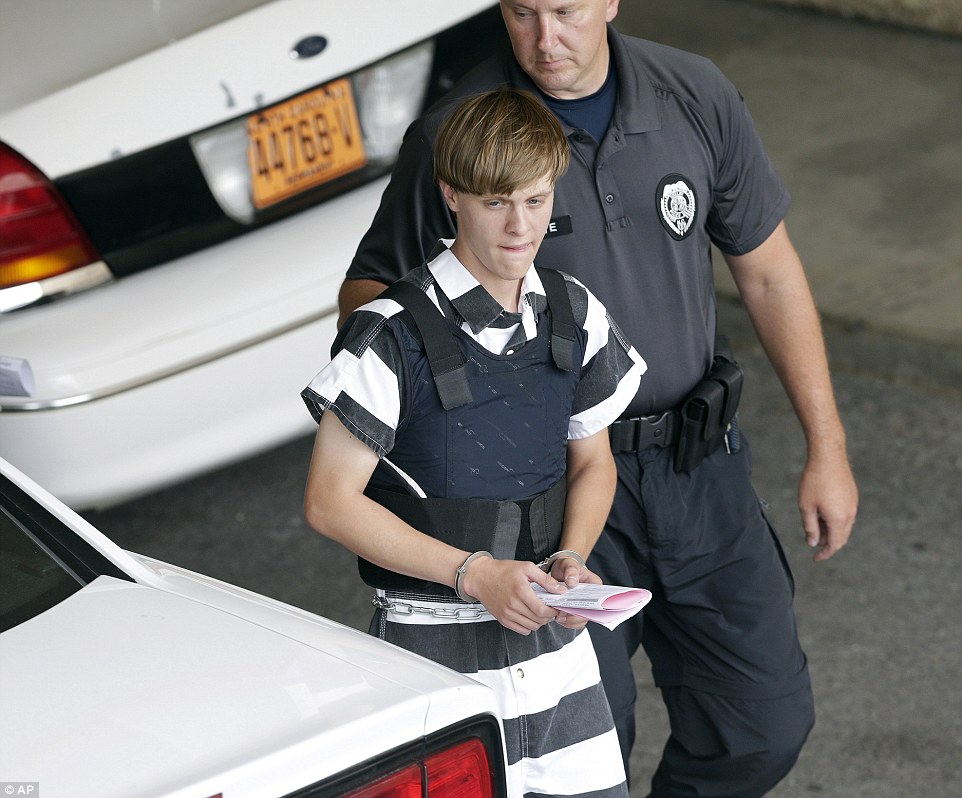 Being escorted: He was chaperoned, in chains and a bullet proof vest, by more than a dozen armed officers onto the plane 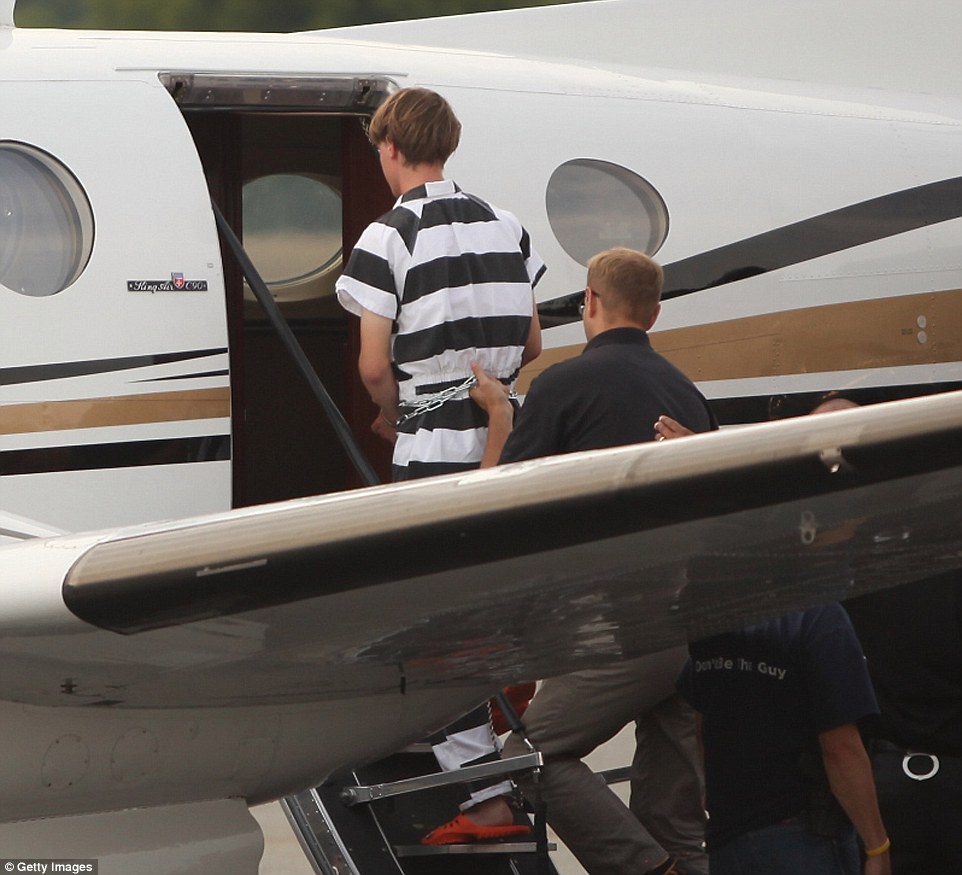 Prison stripes: Roof, 21, is pictured being escorted onto a plane to be extradited to South Carolina on Thursday 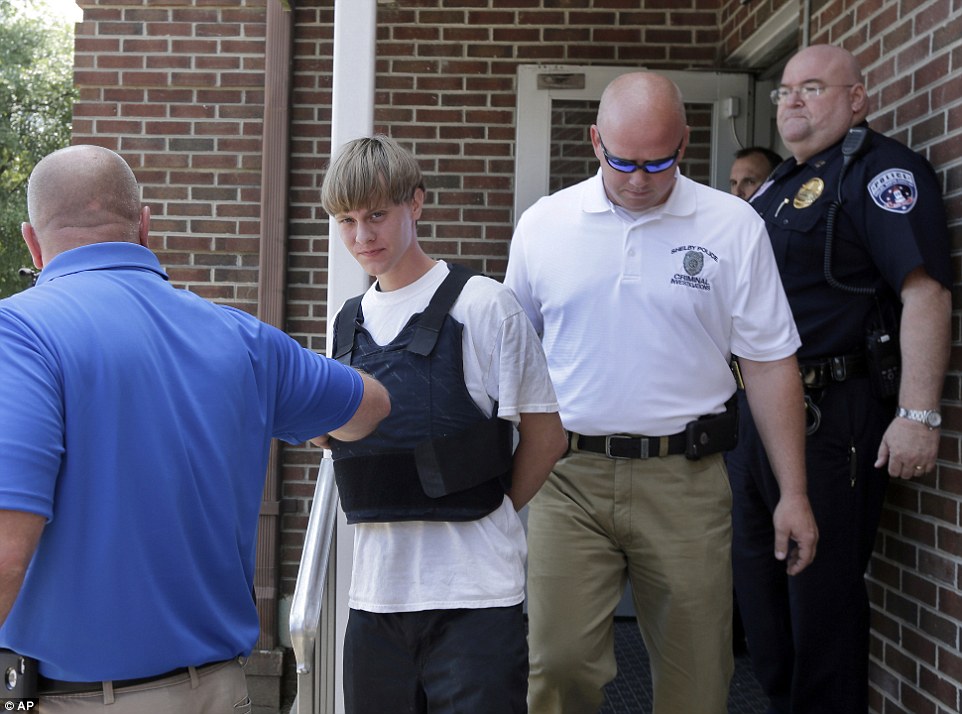 All smiles: Roof appeared to smile as he was hauled away from the Shelby Police Department in North Carolina at noon on Thursday 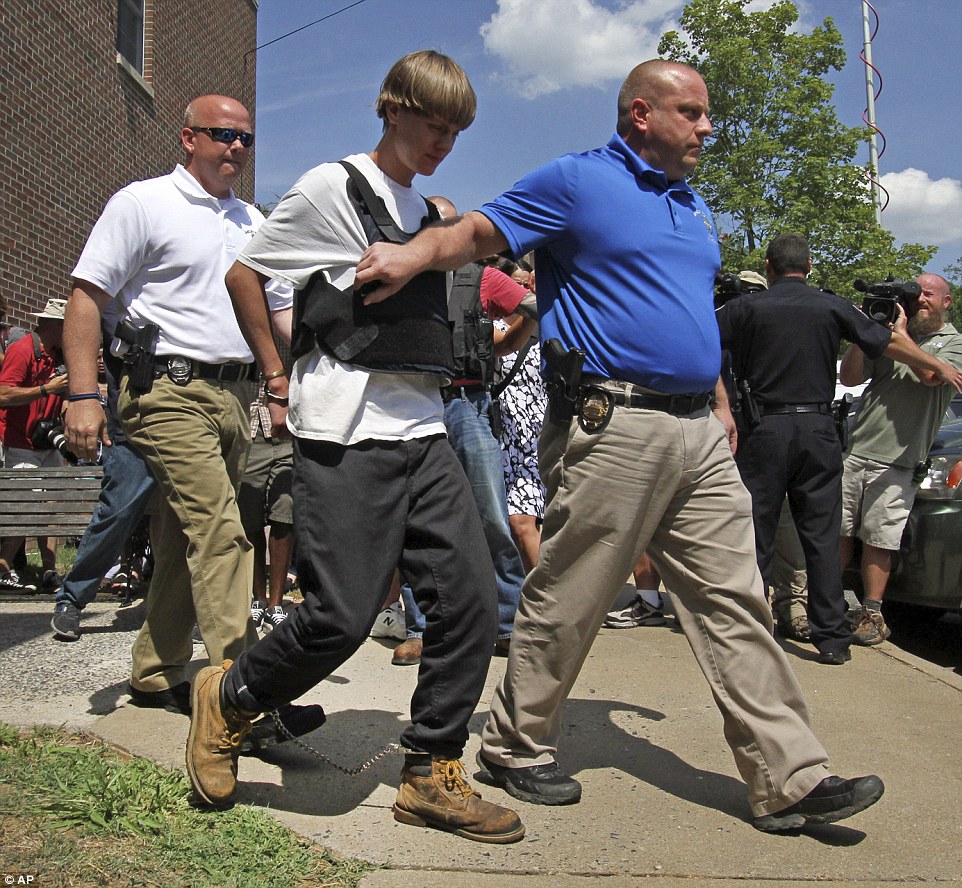 Led away: Roof appeared to smile again as he was taken away from the police department as members of the media swarmed nearby 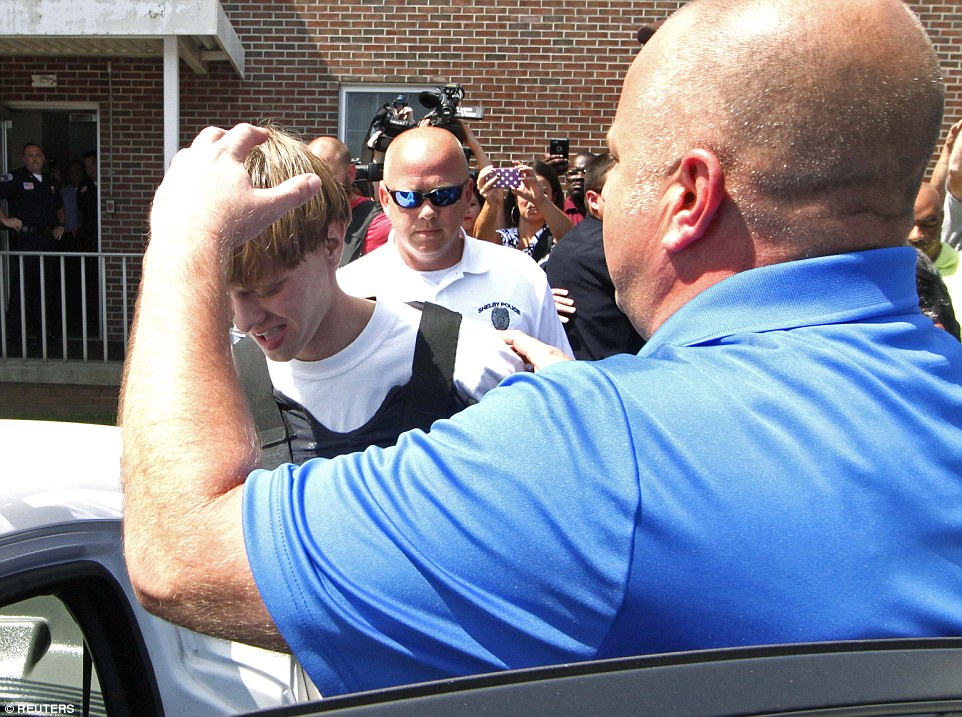 Heading back south: Roof has waived extradition in North Carolina and has been cleared to return to South Carolina
On Friday, South Carolina Governor Nikki Haley told the Today show that ‘we will absolutely will want him to have the death penalty’. His uncle added to ABC News that, if he does get the death penalty, he ‘will push the button myself’.

On Wednesday, Roof allegedly entered the church and joined the bible study group for as long as an hour before suddenly opening fire on the group.

One survivor recounted how he reloaded his gun five times as he picked off his victims – killing six women and three men, including the Reverend Clementa Pinckney, who is also a South Carolina state senator. He killed them with a gun he’d bought himself, he told cops.

Pinckney’s cousin told NBC News that one of the survivors told her they had urged Roof to stop.

‘He just said: “I have to do it. You rape our women and you’re taking over our country. And you have to go”,’ Sylvia Johnson said.

Roof spared one woman so she could ‘tell the world what happened’, eye witnesses recounted. The gunman then fled.

Police launched a massive manhunt for Roof and released surveillance images showing him and his car, warning the public that he was dangerous. He was eventually caught on Thursday morning after a woman recognized his car and haircut and called her boss, who called 911.

His roommate told ABC News that Roof had been ‘planning something like that for six months’.

‘He was big into segregation and other stuff,’ the roommate, Dalton Tyler, said. ‘He said he wanted to start a civil war. He said he was going to do something like that and then kill himself.’

Another friend, Joseph Meek Jr., said he had reconnected with Roof just a few weeks ago after falling out of touch for years.

He said that they never talked about race years ago when they were friends, but recently made remarks out of the blue about the killing of unarmed black 17-year-old Trayvon Martin in Florida and the riots in Baltimore over the death of Freddie Gray in police custody, Meek said. 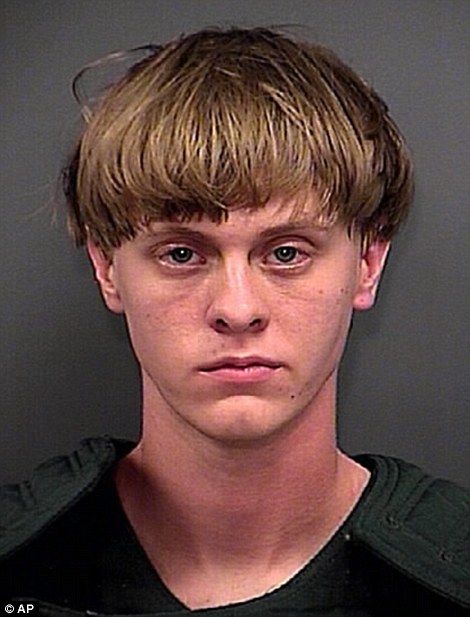 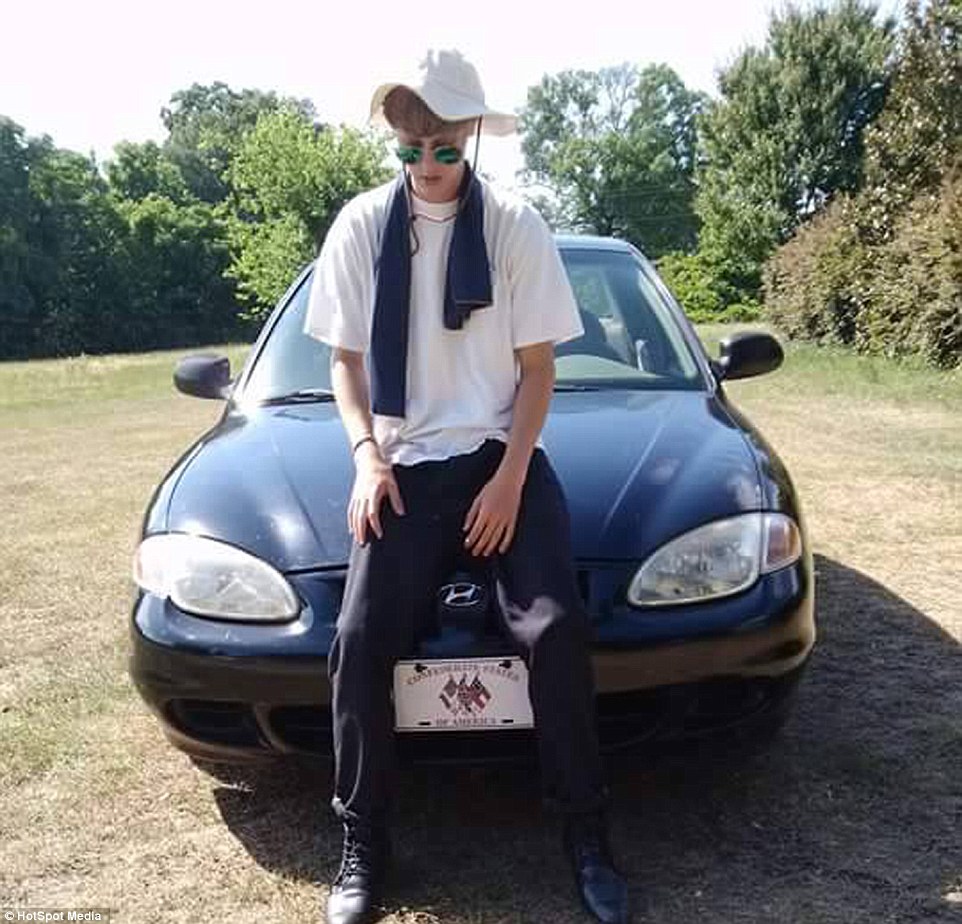 Getaway vehicle: A photo appears to show Roof sitting on the hood of the black Hyundai seen in surveillance footage, the one in which he allegedly fled from the scene Wednesday. It shows a novelty plate on the front bumper – 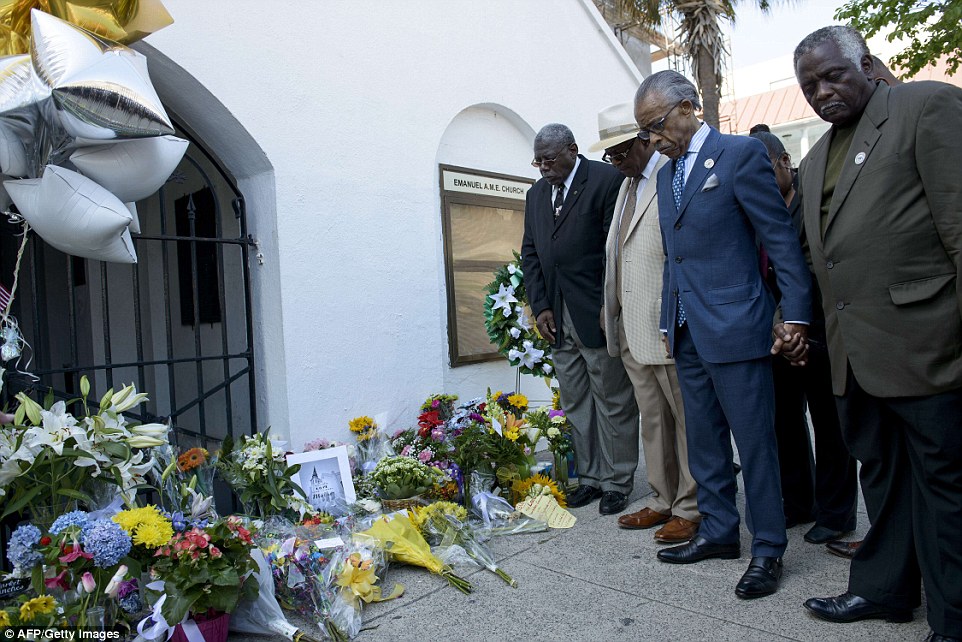 Mourners, including Al Sharpton, pray outside the church on Thursday afternoon. 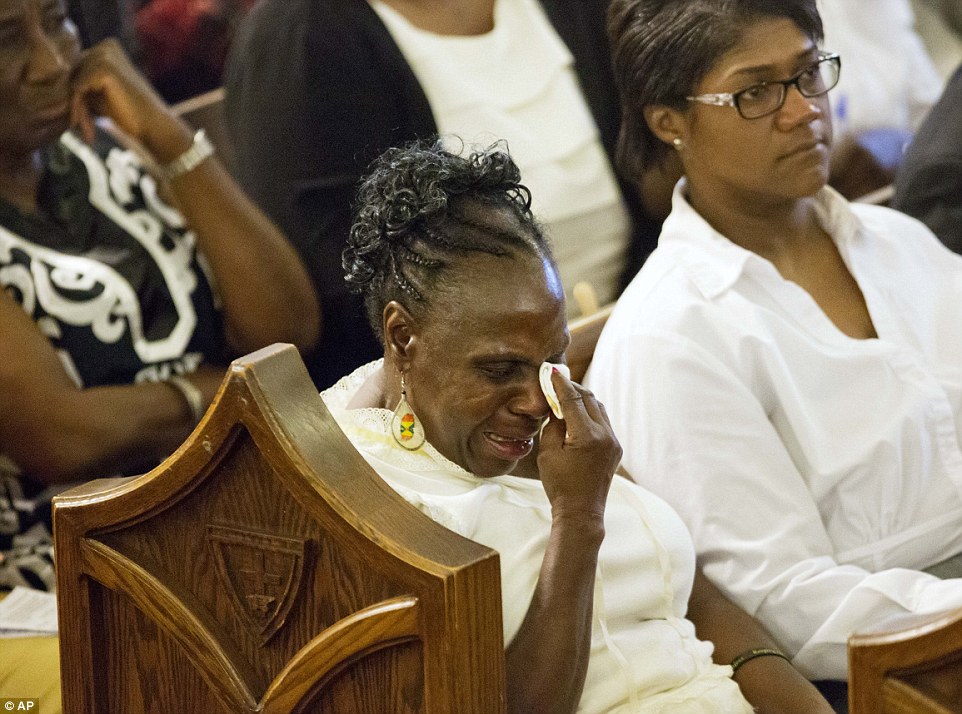 Heartbroken: A parishioner wipes her eye during the memorial service at Morris Brown AME Church 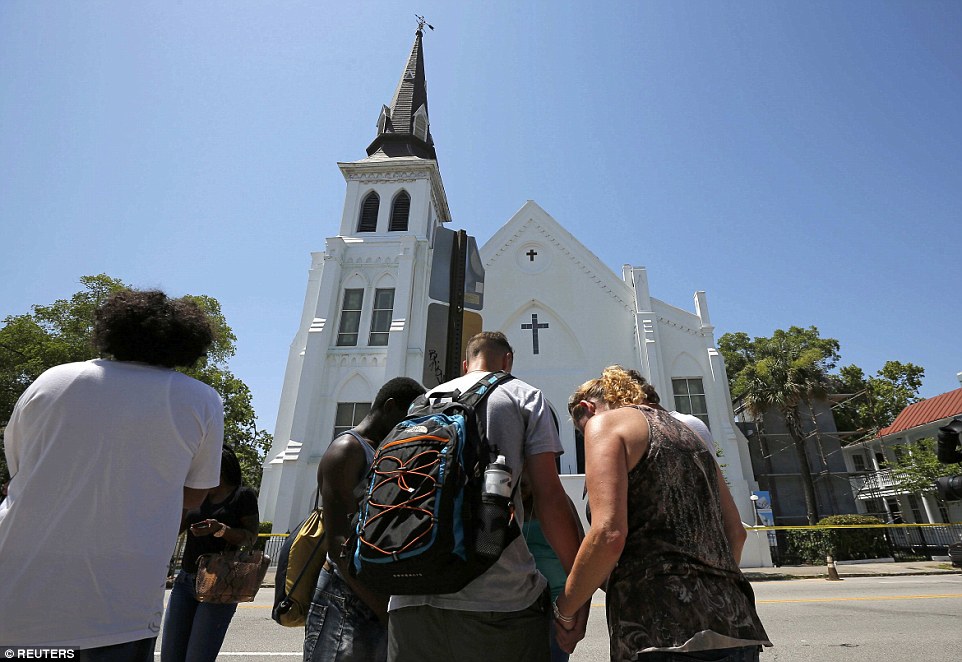 Together: Mourners hold hands as they pause outside Morris Brown AME Church during a vigil on Thursday
Read more….