While President Trump stood and sang the national anthem, a message projected onto the exterior of the stadium read, “F**K TRUMP”

At the College Football FBS National Championship (CFP final) last night, President Trump proudly walked onto the field with the Color Guard for the playing of the national anthem. Not only did the President stand with his right hand over his heart for the anthem, he also sang along.

In contrast to President Trump’s unabashed patriotism, the Metro Atlanta Democratic Socialists of America projected “FUCK TRUMP” onto the exterior of the stadium and tweeted,”Welcome to Atlanta where the players play and where the Democratic Socialists have an awesome projector like every day. (You’re not welcome in District 5 or anywhere else in ATL you orange fascist).” And, it is these hateful liberal weenies who claim the mantle of love, tolerance, and understanding.

Then, there is this miserable excuse for an American, Alabama running back (#9) Bo Scarbrough, pictured below, who screamed “Fuck Trump” as he exited the locker room (video, below). 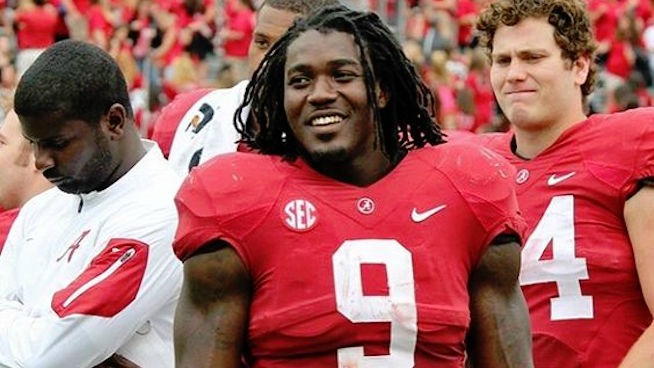 Is What The CDC’s VAERS Not Telling Us The Real Danger Of The COVID Jabs?
May 6th, 2021 Sons of Liberty Media
Contact us