Like a rolling snowball, the Honduran caravan is growing, picking up more illegals as it heads north, now up to 14,000. What should we do? Take our poll

Waving the Honduran flag and alternately singing the Honduran and Guatemalan national anthems while demonstrating no apparent love for the country they intend to invade, the caravan that began in Honduras stubbornly continues its march north through Mexico, en route to the US southern border, which they intend to cross illegally, then beg for asylum or simply disappear into the country.

A mere 160 Hondurans assembled in San Pedro Sula, Honduras on October 12 (Columbus Day, ironically), growing to over 2,000 migrants by the time they departed. There is video of the wannabe illegal immigrants being paid as they prepared to embark on their journey north….

Along the route north, the caravan has steadily picked up new members in Guatemala and now in Mexico and is still growing, estimated now at 14,000. It appears the caravan may grow to 20,000 by the time it reaches the US border.

Central Americans and Mexicans have been conditioned to believe that there is no border between Mexico and the United States, that the United States is not a sovereign nation, that they can exploit America as they wish, albeit illegally. They are not concerned with American law, as they, again, have been conditioned by experience to understand that it does not exist, that it will not be enforced.

So, how should this problem be handled? Should we wait until the caravan reaches our border, then let them all enter, and try to deal with the crisis of detaining them (impossible) in detention centers that are so full now that ICE has been forced to release those who have reached the legal limit of their detention?

Should we stop them at the border, not let them in, force problem on Mexico? I believe that will result in the migrants spreading out and attempting to enter the United States illegally at whatever convenient breaching point they happen to find between San Diego and Brownsville. Obviously, many will make it across as our Border Patrol will be overwhelmed attempting to apprehend them. And, if they do apprehend them, then what do we do with them?

Or, should we be real hardasses and haul them down to Tierra del Fuego (southern tip of South America) and make them walk home, which should take about two years. They should be tough enough by then to eat gangbangers for breakfast and fix their own country, and it would certainly be a solid deterrent to attempted caravanning to the US again. Halfway kidding about that, as you know we Yanks are way too PC for it, but if there is anyone who would do it, he is in the White House today.

Obviously, we need a strong deterrent to prevent others from attempting the long journey north to invade the United States, which, heretofore, has not done enough to deter future wannabe illegals from attempting to enter the US illegally.

I think I would favor a joint US/Mexican task force that confronts the caravan wherever it happens to be right now, load them onto trucks and haul them to San Pedro Sula, Honduras, where the caravan started. I wouldn’t bother with separating Mexicans and Guatemalans from the Hondurans – too much trouble. Everyone goes to Honduras. They can figure out how to get home from there.

In addition, obviously, border security must be tightened, not only in the United States, but also Mexico and Guatemala. I have seen no greater advertisement for a border wall on the US-Mexican border than this caravan crisis.

The people of Honduras (and El Salvador) have a big problem in their country – corruption and gang violence. THEY need to fix that! They can’t expect to drag their problems into a peaceful, sovereign nation because they are too cowardly to address those issues themselves at home.

Take our poll, below, and let us know what you think.

“Members of the illegal immigrant caravan chanted ‘si se pudo!’ as they made their way north through Mexico Monday, having defied the will of one country and vowing to test the spine of another, the U.S., very soon.

The chant, which translates roughly as ‘Yes we could,’ is a takeoff on the ‘Si se puede’ — Yes we can! — cheer that immigrant-rights activists have used for years, and which the Obama campaign co-opted in 2008.

Mexican police, who failed to stop them at that country’s border with Guatemala, now serve as escorts for the caravan as it barrels north, its members clear that they have no intention of staying in Mexico, and have eyes only for the U.S.

New estimates cited by El Universal, a Mexican newspaper, say the caravan now has 14,000 people, many of them already in Mexico while others still wait

One woman quoted by BBC, identified as Maria, walking with her husband and two children, said they are looking for work.

That would put them in the category of illegal migrants, not asylum-seekers. Yet many appear confident they can take advantage of lax U.S. laws to gain a foothold in the shadows.” 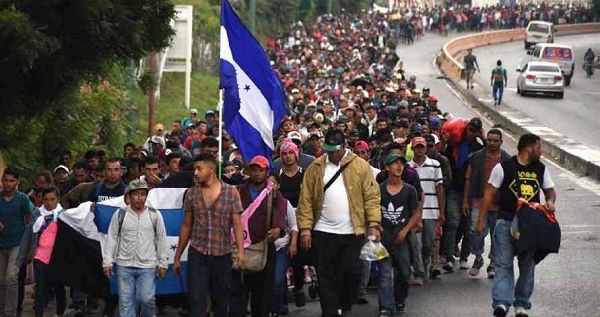 What should we do about the Honduran caravan crisis?