Where is Jesus Campos? The wounded Mandalay Bay security guard ‘checked into a quick clinic’ minutes before his scheduled press conference. Why?

Now we are being told that Jesus Campos, the first person shot by Vegas madman Stephen Paddock, checked into a “quick clinic” just before his scheduled press conference.

I looked up “quick clinic,” as I had never heard the term before. They are the commercial emergency room alternatives that have been popping up everywhere over the past ten years.

If his wound was that bad, why didn’t the hospital keep Campos admitted until he was well enough that he wouldn’t need emergency care?

How long was Campos in the “quick clinic” and where is Campos now?

Jesus Campos, the hero security guard who was shot in the Las Vegas hotel massacre, checked into a ‘quick clinic’ after vanishing moments before he was due to speak to the media for the first time since the attack, reports Daily Mail.

The security guard is yet to be interviewed since he was shot by Stephen Paddock on October 1 on the 32nd floor of the Mandalay Bay hotel.

On Thursday, Campos was due to appear at a press conference after being given an award for his bravery but he disappeared.

His union representative revealed on Saturday that Campos was taken to a clinic shortly afterwards but he did not know which.

‘Right now I’m just concerned where my member is, and what his condition is. It’s highly unusual.

‘I’m hoping everything is OK with him and I’m sure MGM or the union will let (media) know when we hear something,’ David Hickey is the president of the Security, Police, and Fire Professionals of America, told Fox 5 Vegas.

Campos was pictured for the first time on Friday as he accepted an award from the union. 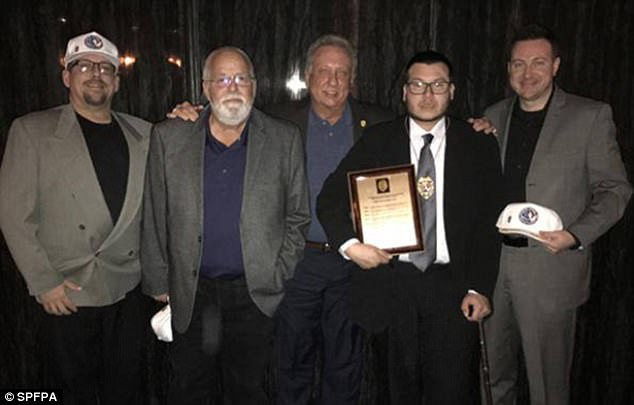 Campos (second from right) is shown accepting an award from the International Union of Security, Police and Fire Professionals of America on Monday 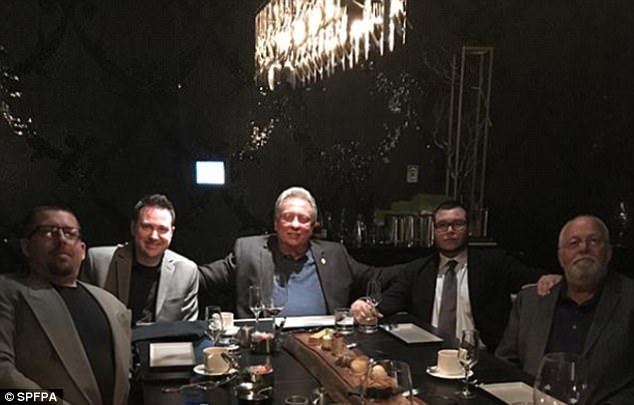 As of Friday morning, the whereabouts of Campos (second from right) were unknown

According to the latest timeline provided by police detailing the events of October 1, Paddock sprayed 200 rounds into the hallway on the 32nd floor of Mandalay Bay, wounding Campos in the leg, six minutes before he unleashed his barrage of bullets on the crowd attending the Route 91 Harvest Festival.

Campos, who was unarmed, survived the shooting and was scheduled to sit down for five TV interviews Thursday night, including one on Fox News, but suddenly vanished.

ABC News reporter Stephanie Wash tweeted Thursday, quoting the president of Campos’ labor union: ‘We were in a room & we came out & he was gone.’ 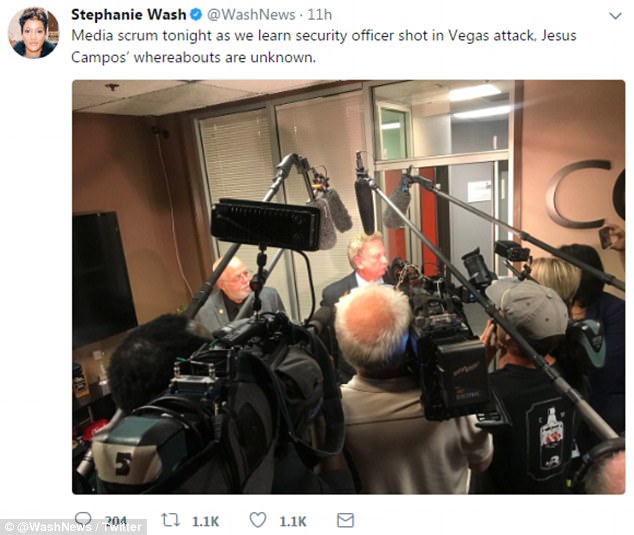 Mandalay Bay security guard Jesus Campos, who was shot before gunman Stephen Paddock opened fired, disappeared Thursday night, just moments before he was set to speak to the press

ABC News reporter Stephanie Wash tweeted Thursday, quoting the president of Campos’ labor union: ‘We were in a room & we came out & he was gone’