California has long been the cultural center of the planet, with its TV and movie arts industries and Silicon Valley cutting edge and global-leading technology centers. The entire world is influenced in countless ways by what happens in California.

California has also long been the home of nutjob politicians, at every level – local, state, and federal. The most whacked out career parasites in Washington (think Pelosi) call California home.

Leading the world again in legislative lunacy, the California legislature has taken political correctness to new a new level, passing a law that requires high schools to award diplomas to ALL students, even those who fail! Has “failure” lost all meaning to Californians?

What’s the point in going to school? Why attend any classes at all? Why study? Skipping class and partying will earn a kid the same reward that his more conscientious classmates are awarded.

Not being able to read at eighteen years old is a sin against society, a crying shame, and will earn the irresponsible shirker a life of misery. Not everyone can become a rapper.

This new law and yoke around employers’ necks becomes effective in just a few days, January 1, 2016.

I know! You think I’m kidding. Nope! I’m not. This is NOT satire. This is the lunatic left that runs America’s largest (GDP) state. Here is a link to the new law. Read it for yourself…. Diplomas? We don’t need no stinking diplomas!

Not only will this legislation hurt less capable and/or irresponsible students who take advantage (kids do that), but it will also hurt even the brightest students, as standards of learning will become completely irrelevant and unnecessary, completely disappearing over a short period of time. I find it amazing that the powers that be in California have not connected those dots.

So, the result will be an entire state of lamebrains. As if Californians aren’t stupid enough! After all, they elected a governor multiple times who calls himself Governor Moonbeam (photo below), who signed this legislation into law. SB-172 will certainly make the Golden State’s young adults entering the workforce “more stupider,” a future California term. Look it up in five years. 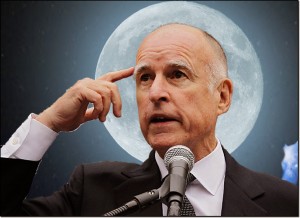