VIDEO: Hey, Europe, listen to Brigitte Gabriel, who lived throught it, as she presents a history lesson on what happens when a civilized society invites Muslims into their country 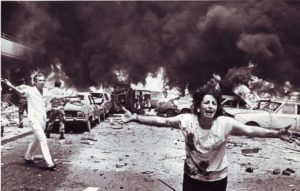 Europeans, please watch this video and pay close attention. THIS is where you are heading if you do not convince your governments to cut the politically correct “open borders” nonsense.

Brigitte Gabriel is an American journalist, author, and lecturer. She is devoted to spreading the news of the global scourge we know as Islam, the uncompromising ideology intent upon dominating the world and destroying civilization as we know it.

Brigitte knows of which she speaks. As a Christian, she barely survived the Lebanese Civil War in her home country of Lebanon. I included her biography below the video.

Brigitte Gabriel was born in the Marjeyoun District of Lebanon to a Maronite Christian couple, a first and only child after over twenty years of marriage.[10] She recalls that during the Lebanese Civil War, Islamic militants launched an assault on a Lebanese military base near her family’s house and destroyed her home. Gabriel, who was ten years old at the time, was injured by shrapnel in the attack.[1][11] She says that she and her parents were forced to live underground in all that remained, an 8-by-10-foot (2.4 by 3.0 m) bomb shelter for seven years, with only a small kerosene heater, no sanitary systems, no electricity or running water, and little food.[12] She says she had to crawl in a roadside ditch to a spring for water to evade Muslim snipers.[12][13][14]

According to Gabriel, at one point in the spring of 1978, a bomb explosion caused her and her parents to become trapped in the shelter for two days.[15] They were eventually rescued by three Christian militia fighters,[16] one of whom befriended Gabriel but was later killed by a land mine.[17]

Gabriel wrote that in 1978 a stranger warned her family of an impending attack by the Islamic militias on all Christians. She says that her life was saved when the Israeli army invaded Lebanon in Operation Litani. Later, when her mother was seriously injured and taken to an Israeli hospital, Gabriel was surprised by the humanity shown by the Israelis, in contrast to the constant propaganda against the Jews she saw as a child.[12][18] She says of the experience:

I was amazed that the Israelis were providing medical treatment to Palestinian and Muslim gunmen…These Palestinians and Muslims were sworn, mortal enemies, dedicated to the destruction of Israel and the slaughter of Jews. Yet, Israeli doctors and nurses worked feverishly to save their lives. Each patient was treated solely according to the nature of his or her injury. The doctor treated my mother before he treated an Israeli soldier lying next to her because her injury was more severe than his. The Israelis did not see religion, political affiliation, or nationality. They saw only people in need, and they helped.[12][19]

Europe is facing an insurgency no different from what’s happening in Iraq — just not fully violent yet.

Norwegian blogger Fjordman writes, “As Mark Steyn points out, the Jihad in the streets of France looks increasingly like the early skirmishes of an impending Eurabian civil war, brought on by massive Muslim immigration and multicultural stupidity. And it is by no means limited to France. Law and order is slowly breaking down in major and even minor cities across the European continent, and the streets are ruled by aggressive gangs of Muslim youngsters. Countries such as France, Holland and Sweden could soon reach a point where the Muslim population will create something akin to civil war, as it already has in the above mentioned nations. Even though this conflict may start out as civil wars in a handful of countries, it could spiral out of control and spread too much of the continent, dragging in foreign fighters from the Arab world.”

This civil war between Europeans and Muslim immigrants who have had success of imposing their kind of civilization on Europe is the result, Fjordman says “of today’s decadent, bored, post-religious and post-nationalist Europe that is no match for Islam, unless it rediscovers a belief in its own culture and a will to defend it. If not, the end result will either be Eurabia or a Pakistanization of Europe, the way we have already seen for generations in the Balkans.” The Pakistanization of Europe is one such scenario he sees for Europe.

“Muslims aren’t numerous enough to control the entire continent. In the event of war, there will be mutual ethnic cleansing and Muslims will seize parts of Western Europe. For instance, a belt stretching from parts of Germany via Belgium and Holland to France, but maybe even regions within certain nation states. All of Europe will not be lost, but some parts will, and many others will be deeply damaged by the fighting. Many of our cultural treasures will burn. How things will go from there is difficult to predict. Perhaps this new “Pakistan” in the heart of Europe will be the source of constant instability and the staging ground for Jihad incursions into infidel areas, just as Pakistan is to India now.”

Fjordman believes that the spark for the civil war many happen in one of two ways.

“It will start, as these things always do, before anyone is ready. It may start more or less by accident. This war may begin with the murder of a symbolic but politically unimportant figure. Or a reverse scenario is possible. A nationalist or rightist murders a prominent Islamic figure, sparking a wave of Islamic terror across Europe. Another possibility is a mega-attack, a chemical weapon or simply a massive suicide bomb or wave of bombs that succeed beyond the bombers plans and kills thousands and/or destroys symbolically important targets, a cathedral, a museum, the Channel. The fearful public then demands harsh government action. Some governments act; others are paralyzed and are incapable of taking action causing citizens to defend themselves.”

In other words — chaos and civil insurrection against the feeble social liberal multiculturalists who are unable to respond to the attacks as they do today. Fjordman speaks of the real danger of this.