VIDEO: Now, even a singer of the national anthem at an NFL game is taking a knee and rendering the black power salute

The morons who run the NFL, the morons who own the teams, and the morons taking a knee or sitting on their entitled asses during the national anthem, are killing their golden goose.

It is a tradition to take a couple of minutes before a sporting event to recognize the sacrifices others have made that allow this filthy rich (and just filthy) industry, the NFL, to exist and prosper.

Now, no longer is simply taking a knee or sitting during the anthem enough to satisfy the spoiled crybabies.  Watch Michael Bennett of the Seattle Seahawks, in the first video, below, render the black power salute after sacking white San Francisco quarterback Brian Hoyer. Bennett reportedly only renders the black power salute when the quarterback he sacks is white. Dangerously blatant racism!

Then watch the singer of the national anthem (second video, below) at the Atlanta Hawks versus Detroit Lions game in Detroit. At the end of the song, he not only takes a knee but also renders the black power salute (photo, above).

If you are still supporting the NFL by attending games or even watching them on TV, you are not doing your country any favors. The only way to stop this is the old-fashioned way, hit them in the pocketbook. Boycott the NFL! 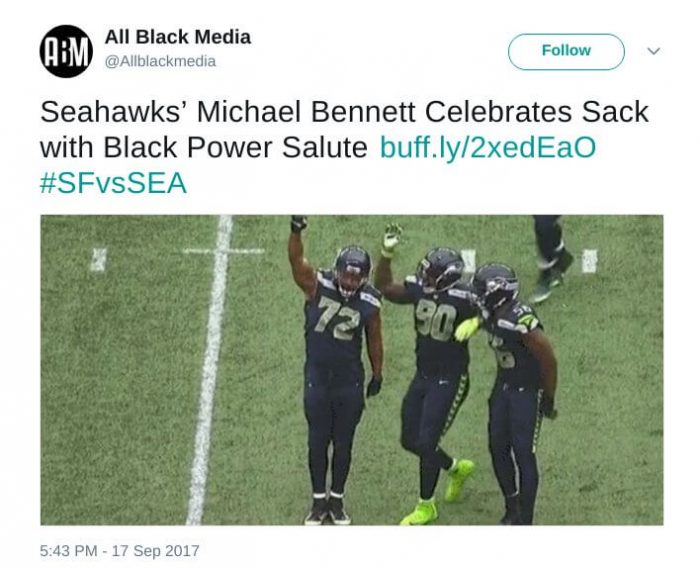