VIDEO: Former Secret Service agent who protected the Clintons is prepared to spill the beans on Slick Willie and Jeffrey Epstein’s Lolita Express

On Fox News and on Twitter, former Secret Service agent Dan Bongino who protected the Clintons battled liberal weenie and Hitlery sycophant Nick Merrill who claims that Hitlery Clinton is a warm and wonderful human being, a polar opposite description of Hitlery as offered by Bongino.

Bongino is prepared to spill more beans on the underage sexcapades of Bill Clinton and name even more names of frequent flyers on the “Lolita Express.”

Epstein pleaded guilty in 2008 in Florida to one count of soliciting underage girls for sex (and one count of adult solicitation), for which he served just over a year in county jail. But sprawling local, state, and federal investigations into the eccentric investor’s habit of paying teen girls for “massages”—sessions during which he would allegedly penetrate girls with sex toys, demand to be masturbated, and have intercourse—turned up a massive network of victims, including 35 female minors whom federal prosecutors believed he’d sexually abused. He has reportedly settled lawsuits from more than 30 “Jane Doe” victims since 2008; the youngest alleged victim was 12 years old at the time of her abuse.

Epstein’s predatory past, and his now-inconvenient relationships with a Who’s Who of the Davos set, hit the front pages again earlier this month when one of his victims, Virginia Roberts, claimed in a federal court filing that Epstein recruited her as a “sex slave” at the age of 15 and “sexually trafficked [her] to politically-connected and financially-powerful people,” including Prince Andrew and attorney Alan Dershowitz. (The latter, the filing claimed, had sex with the victim “on private planes”; Dershowitz vigorously denies the charges, as does Prince Andrew.)

Two female associates of Epstein—the socialite Ghislaine Maxwell and Epstein’s former assistant Sarah Kellen—have been repeatedly accused in court filings of acting as pimps for him, recruiting and grooming young girls into their network of child sex workers, and frequently participating in sex acts with them. Kellen in particular was believed by detectives in the Palm Beach Police Department, which was the first to start unraveling the operation, to be so deeply involved in the enterprise that they prepared a warrant for her arrest as an accessory to molestation and sex with minors. In the end, she was never arrested or charged, and federal prosecutors granted her immunity in a 2007 non-prosecution agreement that described her as a “potential co-conspirator” in sex trafficking.

Maxwell, the daughter of the late media mogul Robert Maxwell, has been accused by Roberts of photographing Epstein’s victims “in sexually explicit poses and [keeping] the child pornography on her computer,” and “engag[ing] in lesbian sex with the underage females she procured for Epstein.” She has denied the allegations in the past.

Clinton shared Epstein’s plane with Kellen and Maxwell on at least 11 flights in 2002 and 2003—before any of the allegations against them became public—according to the pilots’ logbooks, which have surfaced in civil litigation surrounding Epstein’s crimes. In January 2002, for instance, Clinton, his aide Doug Band, and Clinton’s Secret Service detail are listed on a flight from Japan to Hong Kong with Epstein, Maxwell, Kellen, and two women described only as “Janice” and “Jessica.” One month later, records show, Clinton hopped a ride from Miami to Westchester on a flight that also included Epstein, Maxwell, Kellen, and a woman described only as “one female.” 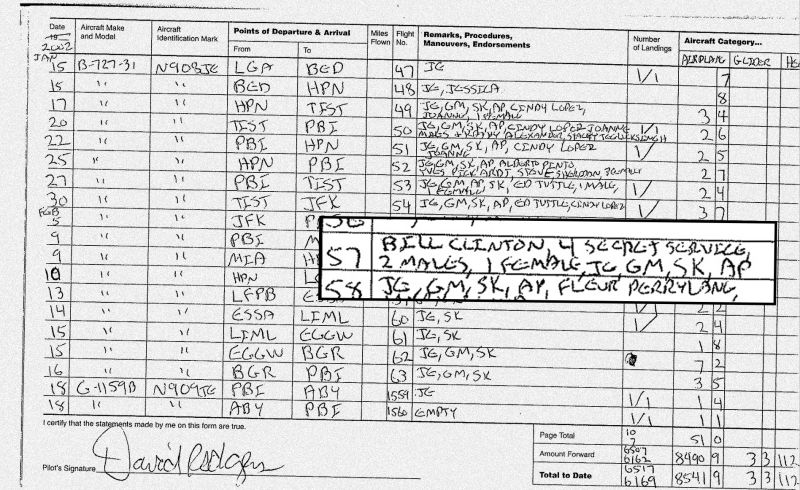 .@dbongino on his time working with @HillaryClinton while in the Secret Service: "I found [her] to be the most deceptive human being, manipulative political person in a position of power I'd ever met in my entire life." #Tucker pic.twitter.com/rtrYqeoMoz

.@dbongino did work on Clinton’s security detail, despite claims by a former Hillary aide that doesn’t ‘recognize him in the slightest’ pic.twitter.com/8wgvpCWbs3

I’ve worked for Hillary Clinton for a decade and 2 things are true.
1) She has enormous respect for the Secret Service & a great relationship with the agents on her detail.
2) This guy was never on the Clintons’ detail, & I don’t recognize him in the slightest. https://t.co/0wgPINBZWu

This guy is a fraud. She treated the Secret Service terribly.So badly that a female agent threatened to quit rather than stay in the Scooby van another minute with her (Unlike this loser, I have names & dates).In addition, I have mounds of official documents backing up my work. https://t.co/uFyycpBYrL

Be careful Nick, people know things not yet released publicly about your messiah Hillary. Don’t poke the bear loser, you may not like the results. #Epstein #EmailGate