Hey, Sharpton, where are you, you racist scumbag?! Black thug kills white girl “for the fun of it” 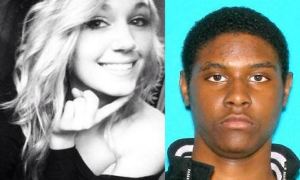 From Conservative Tribune, via Clash Daily

Sharpton and Jackson won’t be inciting protesters and rioters for this one, will they?

You won’t hear about the case of 17-year-old Ashley Marie Scott, a Lansing, Ill., resident who was violently murdered by a black drug dealer, apparently for fun.

Scott and her friends were admittedly up to no good when they agreed to meet Ronald McMahan, a 19-year-old black man who told the group he would sell them marijuana.

But when the group of white teens arrived at the meeting spot in Gary, Ind., McMahan immediately pulled a gun on them and demanded all of their valuables, including cash and jewelry.

The driver of Scott’s group carried his own gun, which he pulled in an effort to deter the thug from taking things any further.

As the driver of the car Scott was riding in sped off, McMahanriddled the vehicle with bullets, one of which fatally struck Scott in the neck and killed her.

Since the possibility of drugs was involved, the media has largely and played the story off as merely a drug deal gone bad (H/T Defund).

But there’s more to the story than that — as the dealer had absolutely nothing to gain by shooting at a car that was speeding away.

The fact that the car was filled with white kids from the suburbs points to the possibility of a racially motivated crime.