I already knew that Bernie Sanders is a worthless career parasite. But I had no idea the depth of the worthlessness of this socialist rodent until I read the following story from Investors Business Daily.

Then 36 years ago the light came on and The Bern discovered the progressive/socialist mother lode, GOVERNMENT WORK, specifically elected government work! He could live comfortably as a career parasite for the rest of his life. All he had to do was get elected. And he knew he could bullshit with the best of them!

And so began a career of parasitic elected positions from mayor of Burlington, Vermont, to the US House of Representatives, to the US Senate, where he is currently “serving,” while he is running for president, neglecting his duties and responsibilities to the good people of Vermont.

To this day I cannot look at Bernie Sanders without seeing Doc Brown from Back To The Future. They have those same crazy mass murderer eyes, like they could snap any second and machine gun everyone in the building. 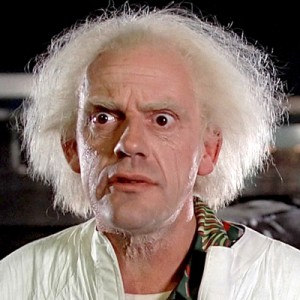 2016: Democratic presidential hopeful Bernie Sanders said Monday his parents would never have thought their son would end up in the Senate and running for president. No kidding. He was a ne’er-do-well into his late 30s.

“It’s certainly something that I don’t think they ever believed would’ve happened,” the unabashed socialist remarked during CNN’s Democratic town hall forum, as polls show him taking the lead in Iowa and New Hampshire.

He explained his family couldn’t imagine his “success,” because “my brother and I and Mom and Dad grew up in a three-and-a-half-room rent-controlled apartment in Brooklyn, and we never had a whole lot of money.”

It wasn’t as bad as he says. His family managed to send him to the University of Chicago. Despite a prestigious degree, however, Sanders failed to earn a living, even as an adult. It took him 40 years to collect his first steady paycheck — and it was a government check.

“I never had any money my entire life,” Sanders told Vermont public TV in 1985, after settling into his first real job as mayor of Burlington.

Sanders spent most of his life as an angry radical and agitator who never accomplished much of anything. And yet now he thinks he deserves the power to run your life and your finances — “We will raise taxes;” he confirmed Monday, “yes, we will.”

One of his first jobs was registering people for food stamps, and it was all downhill from there.

Sanders took his first bride to live in a maple sugar shack with a dirt floor, and she soon left him. Penniless, he went on unemployment. Then he had a child out of wedlock. Desperate, he tried carpentry but could barely sink a nail. “He was a shi**y carpenter,” a friend told Politico Magazine. “His carpentry was not going to support him, and didn’t.”

The only thing he was good at was talking … non-stop … about socialism and how the rich were ripping everybody off. “The whole quality of life in America is based on greed,” the bitter layabout said. “I believe in the redistribution of wealth in this nation.”

So he tried politics, starting his own socialist party. Four times he ran for Vermont public office, and four times he lost — badly. He never attracted more than single-digit support — even in the People’s Republic of Vermont. In his 1971 bid for U.S. Senate, the local press said the 30-year-old “Sanders describes himself as a carpenter who has worked with ‘disturbed children.’ ” In other words, a real winner.

He finally wormed his way into the Senate in 2006, where he still ranks as one of the poorest members of Congress. Save for a municipal pension, Sanders lists no assets in his name. All the assets provided in his financial disclosure form are his second wife’s. He does, however, have as much as $65,000 in credit-card debt.

Sure, Sanders may not be a hypocrite, but this is nothing to brag about. His worthless background contrasts sharply with the successful careers of other “outsiders” in the race for the White House, including a billionaire developer, a world-renowned neurosurgeon and a Fortune 500 CEO.

The choice in this election is shaping up to be a very clear one. It will likely boil down to a battle between those who create and produce wealth, and those who take it and redistribute it.