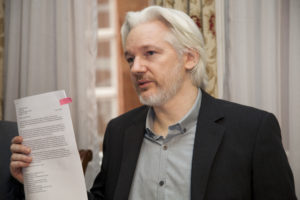 Wow! All the righteous indignation from the steaming pile on the left over an innocuous comment by Donald Trump that they twisted into an assassination demand pales in comparison to this comment made by Hitlery advisor and strategist Bill Beckel.

Remember Fox News? I barely do. I haven’t watched Fox for over a year, since the first GOP debate when Megyn Kelly embarrassed herself and her network on national TV. I don’t miss Fox a bit!

Remember the recovering alcoholic/junkie Bob Beckel from The Five? He was the token liberal on the show most of the time. When he couldn’t get out of bed, Juan Williams or Geraldo or some other liberal doofus filled in.

Remember Beckel blowing a gasket on many occasions when he should have been physically removed from the studio? I remember those. I was actually embarrassed for him.

Now Beckel is suggesting that Julian Assange be assassinated (video, below). His suggestion is not veiled. It is not vague. Says the worn out, used up liberal, “There’s only one way to do it – illegally shoot the son-of-a-bitch.”