How does Beyonce’s disgusting all-black racist halftime show have any place at the Super Bowl? Come on, NFL, you can do better than that!

If you want to be a dancer for Beyonce you must be a good dancer. You must also be black. Crackers need not apply.

Part of Super Bowl 50’s halftime extravaganza, Beyonce’s performance, if you can call it that, celebrated “black power” and the Black Panthers.

I lost interest in the NFL years ago. I got tired of hearing the whining of entitled multi-millionaire crybabies. Now this! I guess the powers that be in the NFL have decided that they don’t need white fans. 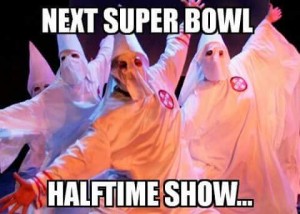 “I think it was outrageous,” Giuliani said on Fox News Monday. “The halftime show I thought was ridiculous anyway. I don’t know what the heck it was. A bunch of people bouncing around and all strange things. It was terrible.”

“This is football, not Hollywood, and I thought it was really outrageous that she used it as a platform to attack police officers who are the people who protect her and protect us, and keep us alive,” he said. “And what we should be doing in the African-American community, and all communities, is build up respect for police officers. And focus on the fact that when something does go wrong, okay. We’ll work on that. But the vast majority of police officers risk their lives to keep us safe.”

From Jessica Elgot, the guardian

With references to the Black Lives Matter movement, Malcolm X and the Black Panthers, Beyoncé’s half-time show at the Super Bowl on Sunday might be the most radical political statement from the superstar in her 20-year career.

Backing dancers wearing Black Panther-style berets and clad in black leather were photographed after the performance posing with raised fists evocative of the black power salute by Tommie Smith and John Carlos at the 1968 Olympic Games in Mexico City.

Beyoncés dancers in black berets at #SB50 paying homage to the Black Panthers 50 years after their #formation in '66 pic.twitter.com/YXpzBkkm6s

Snapped backstage, the dancers also held a picture with the slogan “Justice 4 Mario Woods”, who was shot dead in December by police in San Francisco, this year’s Super Bowl host city.

Woods, who was reportedly armed with a knife, was filmed as he was shot dead after being surrounded by about a dozen police officers. A lawyer representing Woods’s family has called for the federal government to investigate the case for civil rights violations and examine whether any of the five officers involved should face criminal charges.

The dancers’ visual homage to the Black Panthers marked 50 years since the formation of the group, which had its roots in Oakland, less than 50 miles from the stadium where the Super Bowl took place.

Founded by Huey P Newton and Bobby Seale, the movement was a revolutionary black nationalist organisation and one of the most influential civil rights groups of the late 60s, but vilification in the media and some members’ connections to illegal activities led the then FBI director, J Edgar Hoover, to call it “the greatest threat to the internal security of the country”.

Beyoncé was widely tipped to be preparing to make a deeply political statement with her Super Bowl show after releasing a surprise single and video, Formation, on Saturday, which referenced both Hurricane Katrina and the recent mass protests across the US over police killings of unarmed young black men.

The video shows Beyoncé sitting on top of a police car and includes scenes showing a young black boy dancing in front of lines of riot police, who put their hands up, before cutting to a wall of graffiti that reads: “Stop shooting us.”

So much blackness in this. So, so much. And no apologies for any of it. Thank you, @Beyonce. https://t.co/FD5CZuPIz4