Returning home for the first time in over two years, Iraqi Christians celebrate Christmas Mass with US soldiers in newly-liberated Bartella

Bartella, a predominantly Christian town of 25,000, was overtaken by ISIS in 2014. Bartella’s Christian citizens fled to safer locales, many returning on Christmas Eve for the first time to see the wasteland their once beautiful town has become.

This is a very special Christmas season, the civilized world breathing a sigh of relief at the change of leadership in Washington.

Barack Hussein pulling US troops out of Iraq was largely responsible for the rise of ISIS and the death, destruction, and misery across the Middle East, such as that in Bartella, only one example. 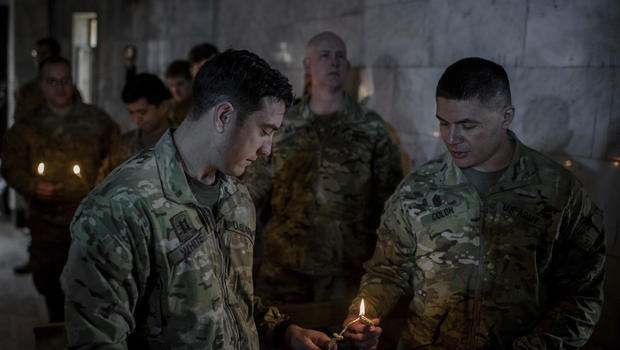 CBS — For the 300 Christians who braved rain and wind to attend Christmas’s Eve Mass in their hometown, the ceremony evoked both holiday cheer and grim reminders of the war raging around their northern Iraqi town, and the distant prospect of moving back home.

Displaced when the Islamic State of Iraq and Syria (ISIS) seized their town, Bartella, in August 2014, the Christians were bused into town from Irbil, capital of the self-ruled Kurdish region where they have lived for more than two years, to attend the lunchtime service in the Assyrian Orthodox church of Mart Shmoni.

Torched by ISIS militants, church-supervised volunteers recently cleaned it up after government forces retook Bartella as part of an ongoing campaign to liberate the nearby city of Mosul and surrounding areas in Nineveh province. But the church is still missing its icons, electrical wiring hangs perilously from its ceiling and most light fixtures are gone. The headless statue of a late patriarch stands in the front yard, its pedestal surrounded by shards of glass.

On Saturday, women joyously ululated when they stepped into the marble-walled church. Almost everyone held a lit candle. Many took photos with their mobile phones. A handful of gas heaters were brought in, but they did little to warm the place on a wet and windy December day.

For many of them, the sight of their hometown in almost complete ruin was shocking. Only a few homes in the once vibrant town of some 25,000 people stand unscathed. Most have been damaged by shelling or blackened by fire.

On one street wall, ISIS’ black banner remains visible under the white paint. Next to it, someone wrote: “Christ is the light of the world. Bartella is Christian.”

“Our joy is bigger than our sadness,” said university student Nevine Ibrahim, 20, who was in Bartella Saturday for the first time since she, her parents and four siblings left in 2014. They found their house badly damaged. Everything they owned was gone.

“I don’t think we can return. The house can be fixed but the pain inside us cannot,” she said, seated among three of her siblings. “Who will protect us?”

Halfway through the service, conducted in Assyrian and Arabic, it became something of a wartime mass. Roughly a dozen U.S. military servicemen and a 100-man contingent from the Iraqi military led by several top generals descended on the church in a show of solidarity.

The COVID Injection “Works” So Well, Fauci Says You Still Need To Muzzle Your Mug Up Indoors After 2 Shots (Video)
July 23rd, 2021 Sons of Liberty Media