VIDEO: Correcting Megyn Kelly’s error, Donald Trump handed her and Baier the BBB document showing an A rating. Kelly did not retract

Poor Donald Trump. He is fighting battles on many fronts – the Democrats, his fellow candidates, the Washington parasite establishment, the GOP, the RNC, and then there is the media, including Fox News which used to be considered the premiere conservative news source, but is now simply viewed as another electronic wasteland of liberal liars with egos too large for the screen.

Case in point – Barbie slut, Megyn Kelly. Engineering more gotcha’ questions at the Detroit GOP debate, a la the first Fox GOP debate, instead of discussing relevant policy positions, the Barbie slut slammed Donald Trump for Trump University having received a D- rating from the Better Business Bureau. Trump quickly corrected her, informing the Barbie slut that the rating had been upgraded by the BBB to an A. The Barbie slut insisted the rating is a D-, provoking cheers from the audience, which had clearly been stacked against Trump, as were previous debate audiences.

Watch these three short videos, beginning with the exchange between The Donald , the Barbie slut, and her Cuban anchor baby colluder, Marco Rubio, beginning at the :30 mark.

Now, watch this video, shot by Independent Journal when the network cameras were off. Trump very clearly hands the document showing the A rating to Brett Baier during a commercial break.

Trump handed a fax to the @FoxNews anchors during the #GOPDebate just a bit ago https://t.co/EvVbvFZAgK

Note Brett Baier handing the document to the Barbie slut, who checks it and acknowledges that Trump is right. But she conveniently never corrects her error. She simply let the error stand, at which point it became a lie.

Now, here is a copy of the document Trump handed Brett Baier onstage at the debate…. 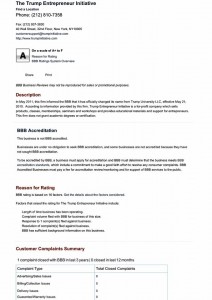 Now, watch the Barbie slut admit that Trump University received an A rating from the BBB, then argue that Trump changed the name of the University, which is why the rating changed from a D- to an A.

Really, Barbie slut? So, when a woman marries and changes her name, her credit rating changes also, right? OF COURSE NOT! People are identified for credit bureau purposes by their Social Security numbers. Likewise, businesses are identified by their tax ID numbers. If the name of a company changes, the BBB rating does not change for that company.

You were wrong AGAIN, Barbie slut. You embarrassed yourself and Fox News yet again on national television. You are a filthy liar!