Barack Hussein is angling to replace Ban Ki-moon as Secretary-General of the UN at the end of 2016. That may not be a wise move, Barack!

So, Barack Hussein has his next gig all worked out, angling to replace Ban Ki-moon as Secretary-General of the United Nations at the end of 2016, ostensibly believing that if he can run America into the ground, just imagine what he can do for the whole world!

I believe this to be a horrible miscalculation on Hussein’s part.

Point #1. The UN does not have taxpayers that can be raped, as Barack Hussein has become accustomed to in America. It has voluntary member countries who participate and contribute at their leisure. If they no longer feel like participating in the funding of the UN, they won’t. Trying to strong arm them will only result in them leaving the organization.

Point #2. If Donald Trump is elected, and Barack Hussein does become Secretary-General of the UN, look for President Trump to execute an immediate exit from the UN, very possibly kicking the corrupt organization out of the US, which is by far the UN’s largest donor, and expect many other western nations to follow America’s lead.

The UN is a useless, broken, corrupt, parasitic paper monster that has no real power to do anything. And they call themselves peacekeepers? GMAFB! 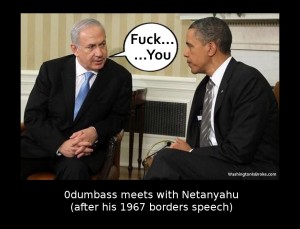 Prime Minister Benjamin Netanyahu remembers well just how US President Barack Obama brushed aside Israeli objections and went ahead with the P5+1 nuclear agreement with Iran.

According to the Kuwaiti newspaper Al-Jarida, Netanyahu will make common cause with moderate Arab governments in order to sabotage Obama’s plan to succeed Ban Ki-moon when the South Korean diplomat ends his term as United Nations secretary-general on December 31 of this year.

Al-Jarida quoted sources as saying that Obama has already discussed the issue of running for secretary-general with Democrats, Republicans, and Jewish officials in the US.

The sources said that once Netanyahu got wind of Obama’s plans, the prime minister began to make efforts to submarine what he has referred to as “the Obama project.”

“Wasn’t eight years of having Obama in office enough?” Netanyahu is quoted in the Kuwaiti daily as telling associates. “Eight years during which he ignored Israel? And now he wants to be in a position that is liable to cause us hardships in the international arena.”

The newspaper cited the widely acknowledged fact that personal ties between Netanyahu and Obama are frayed.

A source close to Netanyahu did not deny to Al-Jarida that the premier is aiming to “torpedo the Obama project,” noting that “his presidency was characterized by [Washington’s] moving closer to the Muslim Brotherhood, toppling the regime of Hosni Mubarak, and attempts to ally itself with political Islam.”

“Obama’s term is ending with him forging an alliance with Iran, coming to an agreement with it on its nuclear program which in the end will result in a similar scenario that took place with North Korea,” the aide said.

“Israel will not allow this to happen,” the source is quoted as saying. “It will take all of the necessary steps to prevent Iran from manufacturing a nuclear weapon either covertly or overtly.”

The prime minister’s associate told Al-Jarida that Netanyahu “sees an opportunity to establish good relations based on shared interests with moderate states from which Obama has moved away.