Even the normally easy-going Aussies are fed up with Islam, staging anti-Islamist protests in several cities as part of “Reclaim Australia” 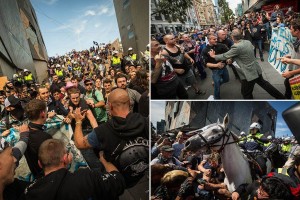 Click on image to enlarge
From The Sydney Morning Herald
Anti-Islamic protests around the country have sparked ugly stand-offs in Melbourne and Brisbane, with police being called in to keep rival protesters apart.In Melbourne, hundreds of people washed spit from their faces on Saturday evening after clashes between supporters of Reclaim Australia, an anti-Islamic movement, and No Room For Racism, a coalition of trade union, community and left-wing groups, including the Socialist Alliance.Police on horseback held the two groups apart, but one-on-one screaming matches occasionally broke out into pushing and shoving.
A Federation Square spokesman estimated 3000  people went at it noisily for more than three hours. Two men and a woman were arrested during the protests.

The Sydney Reclaim Australia, which went ahead in pouring rain in Martin Place, was interrupted by a protester who ran onto the stage and grabbed the microphone from one of the organisers, Sarah Spearpoint, shouting to the crowd they should be “ashamed” of themselves.

The woman put her fingers up at the crowd before being taken away by police with another woman who had accompanied her onto the stage. No charges were laid.