There is an organized army of 1,000 to 1,500 Central Americans marching through Mexico. Destination: the US border, which they plan to illegally cross

Well-organized and determined, a virtual army of Central Americans, mostly Hondurans, has traveled through Guatemala and is now in Mexico, heading north toward the US border, which it is their openly-announced intention to cross illegally, then apply for asylum.

If they are successful, we will no doubt see many more such armies organized and on the way, wave after wave, a virtual flood of illegal immigrants that, not unlike Europe, will have no end until they have totally overwhelmed America.

I think any person with a moral conscience has to pity these poor souls, but must we allow that pity to consume our own children’s and grandchildren’s futures? Which will rule, our head or our heart?

Will we be wise and deny them entry or will we be bleeding heart liberals and open the gate, committing economic and cultural suicide? It is all up to our chief executive. 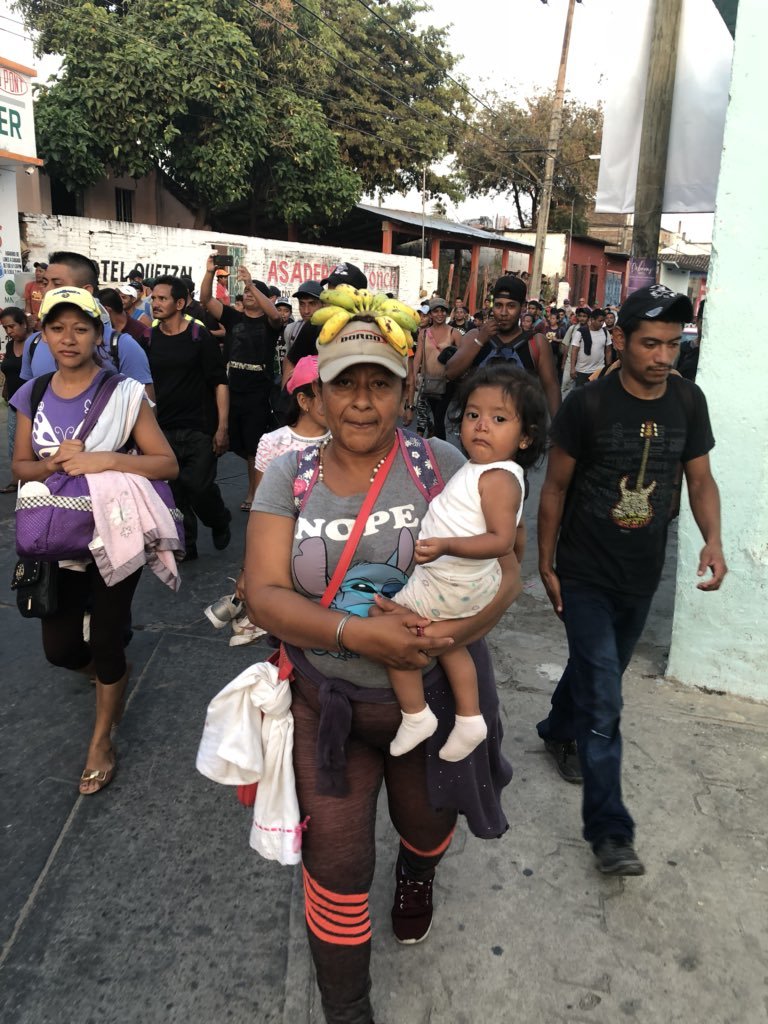 Taking a drag from her cigarette, a Mexican immigration agent looked out toward a caravan of migrants that grew larger with each step they took on the two-lane highway.

When the agent, who’d covered her uniform with an orange and white shawl, learned that the Central American migrants heading her way numbered more than 1,000, she took off for the restaurant across the street.

“I’m going to have a relaxing Coke,” she told BuzzFeed News.

For five days now hundreds of Central Americans — children, women, and men, most of them from Honduras — have boldly crossed immigration checkpoints, military bases, and police in a desperate, sometimes chaotic march toward the United States. Despite their being in Mexico without authorization, no one has made any effort to stop them.

Organized by a group of volunteers called Pueblos Sin Fronteras, or People Without Borders, the caravan is intended to help migrants safely reach the United States, bypassing not only authorities who would seek to deport them, but gangs and cartels who are known to assault vulnerable migrants.

Organizers like Rodrigo Abeja hope that the sheer size of the crowd will give immigration authorities and criminals pause before trying to stop them.

“If we all protect each other we’ll get through this together,” Abeja yelled through a loudspeaker on the morning they left Tapachula, on Mexico’s border with Guatemala, for the nearly monthlong trek.

When they get to the US, they hope American authorities will grant them asylum or, for some, be absent when they attempt to cross the border illegally. More likely is that it will set up an enormous challenge to the Trump administration’s immigration policies and its ability to deal with an organized group of migrants numbering in the hundreds.

The number of people who showed up to travel with the caravan caught organizers by surprise, and has overwhelmed the various towns they’ve stopped in to spend the night. Pueblos Sin Fronteras counted about 1,200 people on the first day.

About 80% of them are from Honduras. Many said they are fleeing poverty, but also political unrest and violence that followed the swearing in of Honduran President Juan Orlando Hernández after a highly contested election last year. The group often breaks into chants of “out with JOH.” They also chant “we aren’t immigrants, we’re international workers” and “the people united will never be defeated.”

Sweating after miles of walking in more than 90-degree heat with her two kids, Karen said conditions in Honduras were so bad she decided to take a chance with the caravan. She declined to give her full name.

“The crime rate is horrible, you can’t live there,” Karen told BuzzFeed News on the side of a highway near Huixtla, a town in Chiapas, Mexico’s southernmost state. “After the president [was sworn in] it got worse. There were deaths, mobs, robbed homes, adults and kids were beaten up.”

Before setting out on the journey, the migrants were organized into groups of 10 to 15 people, and a leader was designated for each group. Five groups were then banded together in what organizers call a sector. While there are organizers from Pueblos Sin Fronteras leading the way, much of the effort to get to the US border is in the hands of the migrants themselves.

They’ve been organized into security, food, and logistics committees. Organizers say it’s meant to help the migrants empower themselves.

Sandra Perez, 40, who’s also from Honduras, is one of two women who belong to the security committee. It’s not her first caravan: She has traveled with a procession of Central American mothers through Mexico in search of disappeared migrants.

“I like doing this, it makes me happy and I feel useful,” she told BuzzFeed News.

Not everyone is planning on crossing into the United States undetected. Migrants like Yonis, an Honduran man who declined to use his full name, are hoping to get their families to other parts of Mexico. He was able to legalize his status in Mexico and is hoping to get his wife and seven month old baby to the Mexican state Nuevo León.

“I have my life there,” Yonis told BuzzFeed News. “We’re all here fighting together, going to different borders, chasing an American dream that sometimes becomes a reality or doesn’t for some.”

Organizers estimate that about two-thirds of people are planing on crossing into the United States undetected or asking for some type of protection like asylum.

Twenty-nine-year-old Mateo Juan said the caravan was his third attempt at getting to the United States. Seven months ago, Mexican immigration officers pulled him off the bus. The same happened about a month ago.

He heard about the caravan in March when he arrived in Tapachula, the caravan’s starting point.

“Going alone is risky. You’re risking an accident, getting jumped by robbers, and even your life,” he told BuzzFeed News. “All of that, and then you don’t get to the United States. The caravan is slower but you know you’re going to get there safely.”

Still, there are no guarantees on the route or assurances that once they reach the US border they’ll be able to cross undetected or be allowed to stay under some type of protection like asylum.

Alex Mensing, another organizer with Pueblos Sin Fronteras, made that point clear to the migrants before the group started out. He also stressed that everyone is responsible for their own food, water, and payment for vans or buses. Still, it’s far cheaper than being assaulted or falling into the hands of unscrupulous smugglers.

Mensing said Pueblos Sin Fronteras isn’t calling on people to make the trek, but if they’re going to try to go through Mexico on the way to the United States, the group will help them.

The caravan propels itself forward using whatever way it can. Sometimes that means packing into the back of a truck, negotiating lower rates for vans, or hitching a ride on the back of empty big rigs from whatever town they’re in. The group sleeps in town plazas. Local townspeople and churches feed them.

In the evening, when the group settles in for the night, the kids play in playgrounds or dart among the crowd, chasing one another. Teenagers and adults play soccer using rocks as goal posts.

On Tuesday, the caravan had plans to board the freight train known as “the Beast” or sometimes “the Train of Death” in Arriaga to speed the journey north. It’s a dangerous part of the journey, with death and injury only too possible from a precarious perch atop a rail car, and the group practiced boarding, one woman in a purple shirt slowly making her way up a parked train’s ladder while the crowd below cheered her on. On another train car, men wearing backpacks steadily made their way up one by one.

“This is so the women and children can lose their fear, know what it’s like to board the train, and turn back if they want,” Irineo Mujica, director of Pueblos Sin Fronteras, told the crowd.

But the train Mujica hoped would move the entire group to Puebla, one of their stops, never came, and in the end the group boarded trucks and school buses to cover the distance to San Pedro Tapanatepec, a town in the Mexican state of Oaxaca.

The move to the trucks was frantic, as people jostled for the limited space, and the security committees made a chain to hold people back. Mostly women and children wearing backpacks and carrying jugs of water got on the first truck.

Moving the entire group took hours, and some of the men, unable to gain a space in the vehicles, walked all night to join the rest of the group. On Friday, Good Friday, the organizers hope to board the Beast at another location.

Yo Portland & Seattle: Does Biden’s Silence About YOUR Violence Bother You?
January 22nd, 2021 Clash Daily