In March, Arizona became the first state in the union to pass legislation defying Barack Obama’s multitude of dictatorial executive actions, denying the funding of any Obama executive orders that have not been debated and passed by Congress.

Republican Representative Bob Thorpe of Flagstaff introduced Arizona House Bill HB 2368, which was subsequently voted on and passed by the Arizona House. The legislation prohibits the state of Arizona from funding any executive orders issued by Barack Hussein, as well as any policy directives issued by the US Department of Justice. A similar bill, House Bill 2643, was also passed, prohibiting implementation of Obamacare.

I spoke to Representative Thorpe’s office to determine the current status of the legislation, and was told that once passed in the House the bill moved on to the state Senate for debate and vote. The Arizona Senate Federalism, Mandates and Fiscal Responsibility Committee overwhelmingly approved the legislation with four yes votes and zero no votes. The bill was then prevented from going to the Senate floor for a vote by Senate President Andy Biggs. According to Sylvia Oliver, a member of President Biggs’ staff the bill was “held” due to time constraints, and may be reintroduced in the next legislative session, beginning in January, 2016. If eventually passed by the Senate and signed into law by the governor, the bill would make Arizona the first state to reject, by legislation, Obama’s unconstitutional executive edicts, in effect becoming independent of federal laws, the closest any state has come to complete secession.

Following is the exact language in the provisions of HB 2368, which can also be found at Arizona’s legislature website. I am also providing a copy of the bill below.

“1. Prohibits this state or any of its political subdivisions from using any personnel or financial resources to enforce, administer or cooperate with an executive order issued by the President of the U.S. that has not been affirmed by a vote of Congress and signed into law as prescribed by the U.S. Constitution.

2. Prohibits this state or any of its political subdivisions from using any personnel or financial resources to enforce, administer or cooperate with a policy directive issued by the U.S. DOJ to law enforcement agencies in this state that has not been affirmed by a vote of Congress and signed into law as prescribed by the U.S. Constitution.” 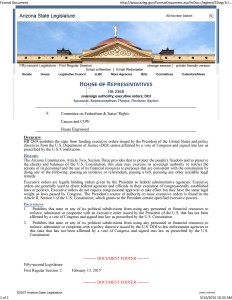