Arresting 25 Antifa rioters on Monday, Portland Oregon police have gotten the message that it is the only way to stop the lawless violence

The only way to stop the Antifa fascists is to hold them accountable for their lawless actions. Arrest and prosecute them. Portland, Oregon police have gotten the message. 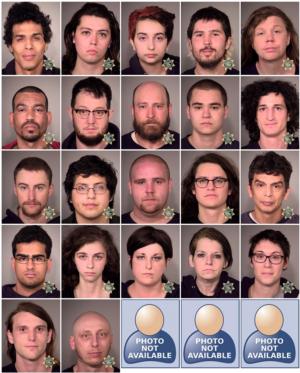 From Portland Police Bureau
On Monday May 1, 2017, 25 people were arrested after a permitted May Day rally and march devolved into a riot after dozens of suspects committed numerous criminal acts including disorderly conduct, riot, arson, criminal mischief (vandalism), theft, and assault.

Prior to the permitted march beginning, officers took possession of numerous sticks, poles, and homemade shields from participants arriving at Shemanski Park in Southwest Portland.

Early in the march, which was scheduled to travel through Downtown Portland and return to Shemanksi Park, rocks and projectiles were being launched at police officers and paramedics, including a full Pepsi can that struck a Portland Fire & Rescue paramedic assigned to assist the Portland Police Bureau’s Rapid Response Team (RRT).

Shortly after that, the situation devolved into a full-scale riot with random acts of vandalism to Downtown businesses, cars, and public and private property. Various fires were set in the street and in garbage cans, a police car was spray-painted and vandalized, and there were attempts to set at least one business on fire. Numerous projectiles were thrown at or launched at police and firefighters including rocks, bottles, ball bearings, fireworks, smoke bombs, and road flares.

Police Bureau Command announced that the permit for the march was being revoked and encouraged all law-abiding participants to leave Downtown Portland.

Criminal suspects were running all over Downtown Portland making it challenging for officers to effect arrests but eventually police were able to capture large groups of criminal suspects and make arrests in the area of Southwest 5th Avenue, Jefferson to Madison Streets. During the riot, there were limited deployments of less lethal munitions by police.

“I’m very proud of the professionalism of Portland Police officers, Portland Firefighters and the members of the other law enforcement agencies that worked to keep the peace in Downtown Portland under very difficult circumstances,” said Police Chief Mike Marshman. “Unfortunately the actions of the law breakers undermined and covered up the message of the law abiding individuals who worked to peacefully get their message heard on May Day.”

Any business or private individual who was the victim of a crime during the riot is encouraged to file a police report by calling the Police Non-Emergency Line at 503-823-3333 or filing a report online at https://www.portlandoregon.gov/police/cor/

A timeline of information and announcements can be found on the Portland Police Bureau’s Twitter account (@PortlandPolice), https://twitter.com/PortlandPolice

Those arrested include three juveniles and 22 adults (age, name, and charge):