15,000 demonstrators protest Islamization of the West in Dresden, Germany

Bleeding heart liberals are labeling those demonstrating against the Islamization of the West as Nazis. It appears they understand Islam as well as they understand history. The Nazis and the Muslims were the best pals in the years leading up to WWII. They were in bed together to commit genocide against the Jewish people. Thus, it would make those very liberals hurling these invectives far closer to the Nazis than the demonstrators protesting the continuing immigration wave of Muslims. 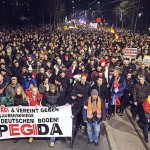 From Kate Connolly, The Guardian

Its members have been dubbed the “pinstriped Nazis” and they refer to their demonstrations as “evening strolls” through German cities. But on Monday night, an estimated 15,000 people joined Pegida, or Patriotic Europeans Against Islamisation of the West, in a march through Dresden carrying banners bearing slogans such as “Zero tolerance towards criminal asylum seekers”, “Protect our homeland” and “Stop the Islamisation”.

Lutz Bachmann, the head of Pegida, a nascent anti-foreigner campaign group, led the crowds, either waving or draped in German flags, in barking chants of “Wir sind das Volk”, or “We are the people”, the slogan adopted by protesters in the historic “Monday demonstrations” against the East German government in the runup to the fall of the Berlin Wall.

Associating themselves with the freedom demonstrations has given Pegida protests an air of moral respectability even though there are hundreds of rightwing extremists in their midst, as well as established groups of hooligans who are known to the police, according to Germany’s federal office for the protection of the constitution.

“The instigators are unmistakably rightwing extremists,” a federal spokesman said.

It was the ninth week in a row that Pegida had taken its protest on to the city’s streets in the eastern German state of Saxony.

Its first march, advertised on Facebook and other social media, attracted just 200 supporters. By last week the figure had risen to 10,000. By Monday night it had grown to an estimated 15,000.

“Muslims are plotting to infect our food chain with their excrement,” said a man in his 60s, who refused to give his name.

Another, a middle-aged woman in a red leather jacket, said she was shocked that “asylum seekers in Germany have expensive mobile phones, while I cannot afford such luxury and others still cannot afford to eat properly”.

While avoiding blatantly racist slogans, some told the Guardian of their angst over the “demise of the West” due to the rise of Islam or voiced their distaste of salafists and homosexuals in the same breath, or decried the recent decision by local politicians to increase the number of homes for asylum seekers. One group, knocking back bottles of the local beer, talked openly of their fears of what they call “fecal jihad”.

No one’s willing to say it, but there are some who just need to die for what they’ve done to us and our country
January 24th, 2022 DC Dirty Laundry