Photo, above: The three Americans who saved a train full of passengers from mass murder at the hands of an Islamist scumbag 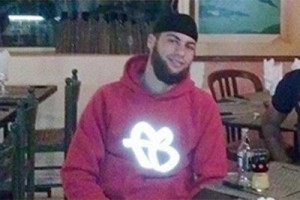 Heavily armed Islamist cockroach, Ayob El Khazzani, was subdued by three Americans aboard a French train before he could commit his intended mass murder

Arras (France) – Authorities on Sunday interrogated a suspected jihadist gunman who was overpowered by passengers on a packed Amsterdam-Paris train, as officials say he had visited Syria and was known to intelligence services.

The alleged attacker, named as 25-year-old Moroccan national Ayob El Khazzani, opened fire with an assault rifle on Friday evening, but was wrestled to the floor by three American passengers who have been hailed as heroes.

The shooting, which underlined the difficulties faced by intelligence services tracking an unprecedented number of potential jihadists, is expected to lead to tighter security for international train services in mainland Europe.

Armed with a Kalashnikov assault rifle, a Luger automatic pistol, nine cartridge clips and a box-cutter, the attacker opened fire on board the high-speed train just after it crossed from Belgium into northern France.

A French passenger tried to disarm Khazzani as he exited a toilet cubicle, but he got away and fired several shots.

Then a Franco-American traveller in his 50s clashed with the man and was shot and wounded. But the attack was quickly stopped when two off-duty US servicemen and their friend charged the gunman and restrained him. 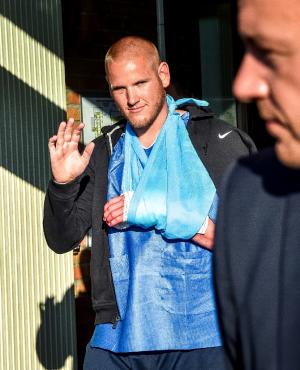 Off-duty US Air Force Spencer Stone, one of the men to overpower the gunman who opened fire

“I looked back and saw a guy enter with a Kalashnikov. My friends and I got down and then I said ‘Let’s get him’,” Alek Skarlatos, a 22-year-old member of the National Guard in Oregon who recently returned from Afghanistan, told France’s BFMTV.

Spencer Stone, who serves in the US Air Force, was first to the gunman, who slashed him in the neck and almost sliced off his thumb with a box-cutter.

“At that point I showed up and grabbed the gun from him and basically started beating him in the head until he fell unconscious,” said Skarlatos. 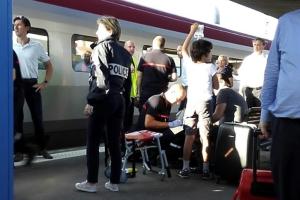 A police officer stands by as a passenger receives medical attention

Norman, 62, said he thought the suspect’s gun may have jammed, preventing more bloodshed.

“My first reaction was to hide but… my thought was I’m probably going to die anyway, I’d rather die being active, trying to get him down than simply sit in the corner and be shot,” he told reporters.

“I don’t feel like a hero. If it wasn’t for Spencer, I think we would all be dead.”

With the man floored, Skarlatos left to search for more gunmen, while Norman helped tie up the attacker with his tie.

Despite his own injuries, Stone then went to help the man who had been shot in the shoulder. Both were hospitalised but are said to be recovering well, and Stone was released later Saturday after surgery on his hand. 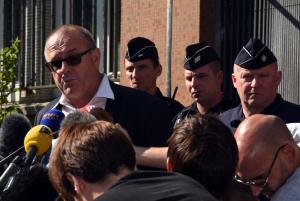 Chris Norman (L), a British business consultant who assisted in subduing the man

Khazzani was finally arrested when the train with 554 passengers aboard stopped at Arras station in northern France.

French actor Jean-Hugues Anglade, who was slightly injured while pulling the train alarm, has accused the train’s staff for locking themselves in the locomotive, leaving the passengers to fend for themselves. Train company managers have denied the claim.

French President Francois Hollande is to thank the Americans and the Briton in person at the Elysee Palace on Monday, while US President Barack Obama called the three Americans and congratulated them on their “extraordinary bravery”.

Questions have focused, however, on the attacker and alleged links to jihadists in Syria.

A Spanish counter-terrorism source said he had lived in Spain for seven years until last year and had traveled to Syria from France.