Taking a break from Syria, how about a steamy sex scandal from Alabama’s governor, who just resigned to avoid impeachment?

Remember when Alabama Governor Robert Bentley ditched Donald Trump for the locker room bravado he shared with reporter Billy Bush on a bus, which was made public a month before the presidential election in an effort to destroy Trump’s election chances?

By The Associated Press, via Tuscaloosa News, October 8, 2016

MONTGOMERY — Alabama Gov. Robert Bentley said he could no longer vote for Donald Trump in wake of the GOP presidential nominee’s sexually charged words about women.

Bentley comments came as state Alabama U.S. Reps. Martha Roby and Bradley Byrne, on Saturday called for Trump to step aside from the GOP ticket. Trump is under fire for his remarks about him groping women in a 2005 recording.

Bentley withdrew his support for Trump after previously saying he would vote for him. The governor said Trump was not his first choice.

Well that’s not the news. The news is righteously indignant though the Gov may have been, now he looks like a complete fool, as well as a garden variety scumbag.

Embroiled in a sex scandal of his own involving an affair with an aide, Bentley was arrested for a pair of “failure to disclose” misdemeanors as a result and has resigned to avoid certain impeachment, with an agreement that he can never hold public office again. Following is a text between Bentley and aide Rebekah Mason, the lovely couple pictured above…. 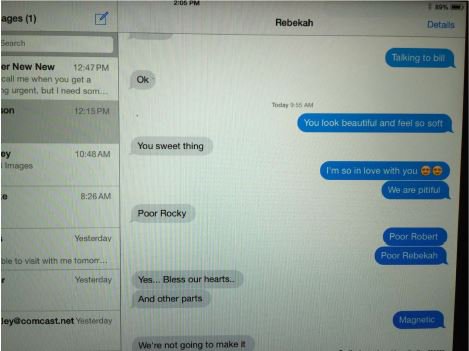 On Monday morning, state lawmakers began hearings to decide whether to impeach Bentley for allegedly using state resources and campaign funds to conceal an affair with a top member of his staff, reports Business Insider.

By Monday evening, with mounting calls for Bentley to resign, the two sides agreed that Bentley would plead guilty to two “failure to disclose” misdemeanors, repay the misused funds, and never hold public office again.

“I have decided that it is time for me to step down as Alabama’s governor,” Bentley said at a press conference Monday evening. “The time has come for me to look for new ways to serve the people of our great state.”

AL.com also reported Monday evening that the governor was booked into Montgomery County Jail for the misdemeanors, though the booking later seemed to disappear:

On Friday, Jack Sharman, special counsel to the state’s House Judiciary Committee, submitted a 130-page report alleging that Bentley intimidated members of his office into keeping quiet about an affair with his adviser Rebekah Caldwell Mason.

“Governor Bentley directed law enforcement to advance his personal interests and, in a process characterized by increasing obsession and paranoia, subjected career law enforcement officers to tasks intended to protect his reputation,” the report concluded.

On Monday, district attorney Daryl Bailey had referred the criminal investigation to Alabama’s acting attorney general. The report authors also specified that they considered Bentley’s attempts to obstruct the investigation by withholding messages as an “independent ground for impeachment.”

“Impeachment is a remedy, not a punishment,” the report added.

Before the report was released, Bentley stood on the steps of the state Capitol on Friday and declared he did “not plan to resign.”

The investigation began after Spencer Collier, the recently fired head of the Alabama Law Enforcement Agency, confirmed he was looking into text messages “of a sexual nature” between Bentley and Mason in March 2016.

The governor’s ex-wife, Dianne Bentley, provided the messages to the House Judiciary Committee. She discovered them on a state-issued iPad her husband gave her that synced his accounts.

Dude, you just gotta’ be smarter than that!

Who knew Karma was an iPad?

If You Are Divided And Are Fighting Amongst Each Other, You Still Aren’t Paying Attention! (Video)
April 13th, 2021 Sons of Liberty Media

The ACU Creates A Push Back Against The U.S. Corporate Wokeism Threatening Our Liberty
April 13th, 2021 The Lid