Hillary is a smoldering pile of witchmeat and the Dems are looking for another candidate. Guess who? Al “Jazeera” Gore! No, I’m serious! LOLOL!

This is the most bizarre soap opera of a presidential race anyone could possibly imagine. It has to be real because no human possesses an imagination warped enough to invent a story like this.

On the right, or somewhere near the middle, leaning right, we have a Republican, leading the pack by a country mile. The bizarre part is that not only is the left attempting to destroy him, so are his own peeps in the Republican Party! I kid you not! They are looking a gift horse squarely in the mouth, who has the potential to make the Republican Party not only relevant again, but overwhelmingly strong. All they have to do is hitch to his star and enjoy the ride to the White House…. and they are in full-on attack mode against the guy. And as if that weren’t enough to make you roll on the floor and laugh yourself to tears, the more they attack the guy, the more popular he becomes and the more his lead in the polls increases. Hilarious! Outrageously bizarre is too mild a term.

Are you off the floor yet? Good. This is intermission. You may want to take a pee break here and grab your favorite beverage before I tell you what is happening on the left.

Here we go. As we all know the Wicked Witch of Benghazi is crashing and burning, her political life hanging by a thread (from a blue dress, I presume). It is still possible that she could recover and be the Democrat nominee, but it is unlikely, as federal penitentiaries do not allow state dinners.

Wracking their underdeveloped brains for a replacement candidate, the Dems have considered a handful (because that’s all they got) of potential candidates. First, there is Liz “Screaming Squaw” Warren, but she’s too green, although she does guarantee the Indian vote.

How about Bernie Sanders? OK, he’s an avowed socialist, but who isn’t on the left side of the aisle? As socialists (and humans) go, Bernie is no spring chicken. He was collecting Social Security when FDR was in office.

Then there’s crazy Uncle Joe, the life of every White House party, dancing nude in the punch bowl, wearing only a lampshade on his head. That’s our Joe. A little too crazy to elect, but hey, wouldn’t that be a hoot?

Still not satisfied that they have found just the right candidate to replace Hillary, the geniuses on the left have…. are you ready for this?…. dug up the corpse of Al “Jazeera” Gore! I know, I know, I busted a gut, too! Hold on, it gets even better. The inventor of the internet, who a full 3% of Democrats claim they will vote for, says he will think about it. LOLOLOLOLMAO!

Oh my, I need oxygen. I can’t take any more. And as if this whole bizarre comedy were not enough…. it is only August, 2015! LOLOLOLMAO! The election is still a year and three months away. Imagine the fun coming our way over the next fifteen months!  By next November Rosie O’Donnell may be running against Barney Frank. 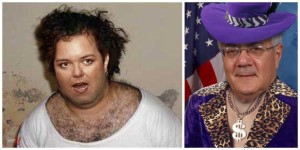 WASHINGTON (Reuters) – Some insiders in the Democratic party are discussing having former Vice President Al Gore make another run for U.S. President, BuzzFeed reported on Thursday, adding that the man who won the popular vote in the 2000 presidential election has not taken any steps toward entering the current race.

“They’re figuring out if there’s a path financially and politically,” an unnamed Democrat told BuzzFeed about the insiders. “It feels more real than it has in the past months.”

Gore, 67, was the Democratic candidate in the 2000 election when the U.S. Supreme Court stopped a vote recount in Florida, which ultimately led to Republican George W. Bush becoming the country’s 43rd President.

Former Secretary of State Hillary Clinton has dominated the small field of Democrats vying to be their party’s candidate in the 2016 presidential election. When she ran in 2008, Gore, who served as vice president under her husband, former President Bill Clinton, declined to endorse her.