Al-Baghdadi’s death or wounding by US or coalition airstrikes has been reported twice before, most recently in September, with the stories ultimately proving unverifiable. This time the news appears to be far more credible, as it is being reported by multiple, highly credible, sources. ~ Thomas Madison 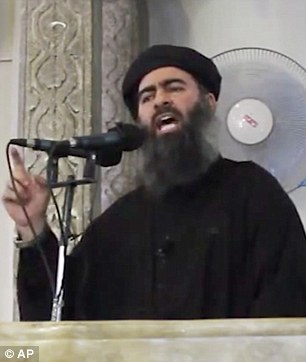 Wounded? Abu Bakr al-Baghdadi, leader the so-called Islamic State, is said to be among those targeted

American war planes have reportedly launched a strike on a gathering of ISIS leaders, critically wounding their leader.

Abu Bakr al-Baghdadi was hurt in the strikes today, according to local witnesses and government sources.

Two witnesses confirmed that bombs had fallen on the town of al-Qaim, next to the Syrian border.

Local government sources described how an aircraft had swooped over a meeting of senior ISIS figures and dropped its payload, killing more than a dozen people.

Another witness said that eight people had died when a bomb struck a market.

A local hospital was said to be overwhelmed with the volume of patients from the raid – including al-Baghdadi.

Local ISIS officials were reportedly roaming the streets with loudspeakers ordering residents to donate blood to help the wounded.

Striking Baghdadi would be the most significant blow yet in the campaign against ISIS, who have been defiant in the face of sustained air attacks from the U.S. Air Force and allies.

A provincial leader from Anbar in western Iraq, as well as his deputy, are said to be among those killed instantly by the bombs.

Al-Qaim and the neighbouring Syrian town of Albukamal are on a strategic supply route linking territory held by Islamic State in Iraq and Syria.

The so-called Caliph, who declared himself leader of all the world’s Muslims in a televised speech, was formerly a prisoner of the U.S. during their occupation of Iraq.

The shady figure was eventually released, and rose through the ranks of the jihadist groups which eventually united to form ISIS, or the Islamic State.

Iraqi security officials could not immediately comment on the reported raid. The U.S. military did not confirm or deny the strike. 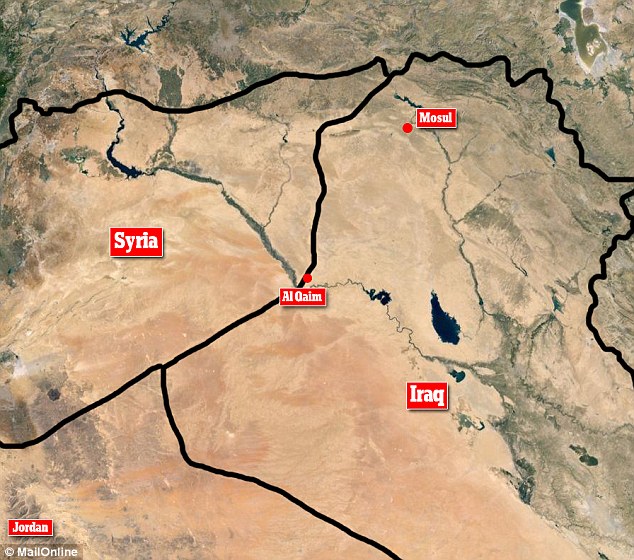 Attacks: Two strikes were reported, one at al-Qaim, near the Syria-Iraq border, and a second in the ISIS stronghold of Mosul
Separately, the coalition of air forces, which includes Great Britain’s RAF and Canadian fighter planes, struck a convoy just outside Mosul, ISIS’s stronghold city in northern Iraq.

U.S. officials would not confirm or deny whether Baghdadi, the group’s overall leader, had been targeted, though one said that the coalition’s airstrikes had not been targeting any particular meeting.

IS-affiliated Twitter accounts rushed to deny the reports, with one tweeting: ‘I can report to the Muslims that Amir Al-Momineen Abu Bakr Al-Baghdadi Hafid hu’allah is alive and well.’ 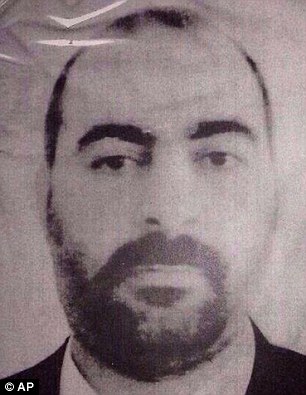 Prisoner: al-Baghdadi, shown before his rise to power, was held as a prisoner by the U.S. during the occupation of Iraq

The hardline Sunni Islamic State’s drive to form a caliphate in the two countries has helped return sectarian violence in Iraq to the dark days of 2006-2007, the peak of its civil war.

It has also created a cross-border sanctuary for Arab militants, as well as foreign fighters whose passports could allow them to evade detection in Western airports.

The U.S. strikes coincide with violence elsewhere in Iraq, after jihadist-style attacks hit the Iraqi capital of Baghdad.

The blasts bring to 28 the day’s toll from bombs in the Iraqi capital and the western city of Ramadi.

‘A driver parked his car and went to a cigarette stall, then he disappeared. Then his car blew up, killing passers-by,’ the source said, describing one of the two attacks in Amil.

The attack by a suicide bomber on a checkpoint in Ramadi in Anbar killed five soldiers. ‘Before the explosion, the checkpoint was targeted with several mortar rounds. Then the suicide humvee bomber attacked it,’ said a police official.

There was no claim of responsibility for the bombings, but they resembled operations carried out by Islamic militants.

In the town of Baquba, 40 miles northeast of Baghdad, a gunman killed a Shi’ite militiaman, and a car bomb targeting a police officer killed his 10-year-old son, security sources said. 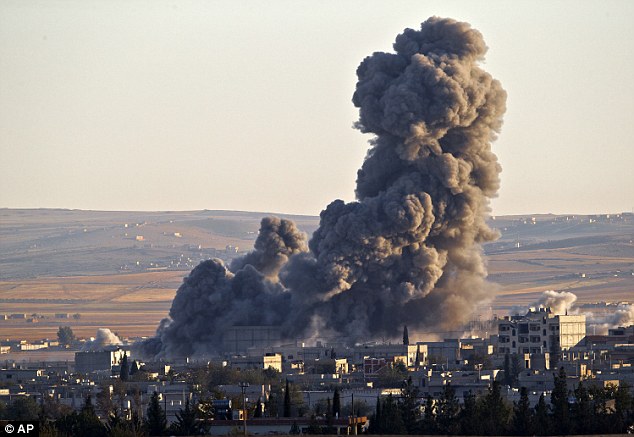 Air strikes: The reports say that U.S. warplanes dropped bombs on the town of al-Qaim in Iraq. Pictured is an earlier strike against ISIS in Kobani, on the Turkey-Syria border

Western and Iraqi officials say U.S.-led air strikes are not enough to defeat the al Qaeda offshoot and Iraq must improve the performance of its security forces to eliminate the threat from the group, which wants to redraw the map of the Middle East.

President Barack Obama has approved sending up to 1,500 more troops to Iraq, roughly doubling the number of U.S. forces on the ground, to advise and retrain Iraqis in their battle against Islamic State.

SOCCER-LOVING PHD STUDENT WHO BECAME WORLD’S WORST TERRORIST WITH $10 MILLION BOUNTY ON HIS HEAD: WHO IS ABU BAKR AL-BAGHDADI?

He used to play for his mosque’s soccer team and has a PhD in Islamic history.

But after spending four years in a US camp during the Iraq occupation, he emerged as one of the most brutal terrorists in the world.

The government placed a $10 million bounty on his head in 2011 when intelligence identified his movements as critically dangerous.

This warrant was publicized once more following the beheadings of US nationals James Foley and Steven Sotloff as well as Britons David Haines and Alan Henning.

He maintained a low profile for months as ISIS, the group’s original name, rose to global infamy and Al Qaeda denounced them as ‘too extreme’.

But he finally revealed himself to the public with a speech, filmed and posted on YouTube, in the first week of July this year.

Born Awwad Ibrahim al-Badri al-Samarri in 1971 near Samarra, Iraq, he came from a Sufi family – a tolerant form of Islam.

In the 1990s, he completed a PhD in Baghdad and played soccer with friends.

But he fell out with mosque leaders and fled to Anbar province where he joined Sunni groups protesting the US occupation.

American forces detained Baghdadi at Camp Bucca in 2005 shortly after the Iraq invasion. He was released when the camp closed in 2009.

He was thought to be ‘bad but not the worst’ sources told The Daily Beast.

But he then joined the Islamic States of Iraq and Syria, and rose up the ranks rapidly.

After allegedly killing the leader, Abu Omar Baghdadi, he took hold of the terror group.

The United States spent $25billion on the Iraqi military during the U.S. occupation that toppled Saddam Hussein in 2003 and triggered an insurgency that included al Qaeda.

Such an alliance would face a more formidable enemy in Islamic State, which has more firepower and funding.