Iran – Concession after concession has been given to Iran, including cash payments promised and delivered by His Most Exalted Majesty. What did we get in return? A runaway nuclear program that has placed our most loyal ally in the Middle East, Israel, in grave danger, plus what Israeli satellite imagery has determined are silos containing long range missiles, likely ICBMs, not necessary to reach Israel, but rather, as Benjamin Netanyahu explains: “They don’t need them to reach Israel. They need them to reach the United States.” Good job, Barrack!

Bergdahl – Just WOW! Our tough Negotiator-in-Chief brought the Taliban to their knees, giving them five high-value Taliban prisoners from Gitmo and five billion dollars…. that’s right, five billion…. in exchange for an Army deserter. This one is a steaming pile that not even Jimmah Cottah was incompetent enough to pull off.

Syria – His Most Imperial Magnificence made a joke of the United States, threatening Syria with fake red lines that continued to move as they were passed by a laughing Bashar al-Assad.

Egypt – The Egyptian government has charged Barrack Obama and Hillary Clinton with criminal conspiracy for their assistance of the Muslim Brotherhood in crimes against the Egyptian people. Unbelievable! Just watch this video:

Hang on, folks, Hussein isn’t finished yet. We can now add to his list of foreign policy debacles his complete and miserable failure in Cuba. Again, His Most Benevolent Graciousness has given away the store in return for not only nothing, but demands for reparations from Fidel Castro in return. Castro, who has turned what was once a thriving and prosperous tropical nation into a cesspool of poverty and misery, and stolen the assets of Americans who owned property in Cuba, valued at an estimated six billion dollars, is now telling The One, “OK, we will accept your lifting sanctions against us and giving us the opportunity to thrive and prosper again, but you must pay us handsomely for the privilege.”

LOL! You just can’t make this stuff up. I expect King Hussein to counter with, “OK, we will accept your additional demands for cash reparations, but only if you take Florida and the US Virgin Islands in the deal.”

Take that, Fidel! You aren’t dealing with rookies here!

It’s official, The Three Stooges are running our country. 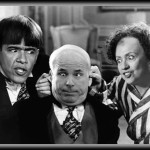 The good news: The discomfort over the embargo of Cuba has led to a good bargaining position in talks with the US. The bad news: Raul Castro’s the one that thinks so. Far from being grateful for the diplomatic overture from Barack Obama, Castro wants the US to pay reparations for the economic damage that Castro says the embargo caused, plus the immediate return of control over Guantanamo Bay, as the opening ante for normalizing relations:

Cuban President Raul Castro demanded on Wednesday that the United States return the U.S. base at Guantanamo Bay, lift the half-century trade embargo on Cuba and compensate his country for damages before the two nations re-establish normal relations.

Castro told a summit of the Community of Latin American and Caribbean States that Cuba and the U.S. are working toward full diplomatic relations but “if these problems aren’t resolved, this diplomatic rapprochement wouldn’t make any sense.”

So much for the yearning of the Cuban people for normalcy, eh? As far as Obama’s suggestion that engagement will bring about reform in Cuba, Castro has another demand:

Without establishing specific conditions, Castro’s government has increasingly linked the negotiations with the U.S. to a set of longstanding demands that include an end to U.S. support for Cuban dissidents and Cuba’s removal from the U.S. list of state sponsors of terrorism.

On Wednesday, Castro emphasized an even broader list of Cuban demands, saying that while diplomatic ties may be re-established, normal relations with the U.S. depend on a series of concessions that appear highly unlikely in the near future.

Only if one believes that these conditions will discourage Obama. He’s desperate for a foreign-policy achievement that will allow him to claim a legacy, and Castro knows it. (So does Iran.) Castro isn’t anywhere near as desperate for normalized relations with the US; he gets plenty of hard currency from the rest of the world, and exchanges it with the near-worthless Cuban peso with which he pays Cubans. Castro wants to strengthen his regime, and humiliating Obama will raise his prestige immeasurably at home.

The problem for Obama is that he largely can’t deliver on these demands without Congressional approval. He can cut off the dissidents, as that’s an executive branch decision, although Congress may have some options to work around it. He could arguably order the US Navy out of Guantanamo Bay, but Congress has more leverage to stop such an operation. That could result in a constitutional crisis that Obama won’t like, as the American public will not consider a military retreat in the face of Cuban demands a particularly laudable move. It would also utterly poison the Democratic Party for 2016, even if Hillary Clinton roars with outrage over the idea. Reparations would absolutely require Congressional appropriation, and needless to say, even Obama knows better than to ask for it.

As this opening bid shows, Castro’s main aim in these talks is clearly to humiliate Obama. After making this pronouncement, Castro will demand at least one of those conditions as non-negotiable, but they’re all non-starters for the US. The easiest for Obama to provide — cutting off pro-democracy dissidents — would expose Obama’s overture to the Castro regime as the craven bid for short-term glory that it is. This is otherwise a waste of time and diplomatic effort, and will be until both Castros are long gone from the scene.