Leftist hosebags hired ARMED security for their DC march. Guess who they are marching against. The NRA, because guns are bad! Not kidding

Oh, this is rich! An aggregation of manatees, I mean a gathering of leftist women, assembled today to march in protest from Fairfax, Virginia to Washington. The shrieking assemblage feels secure, no doubt, with plenty of armed security.

What are they protesting, you ask? Why, the NRA, of course, because guns are really, really bad. The hypocrisy has not occurred to them, I suppose. Or, maybe they just believe that armed protection is for liberal weenies only, never to be entrusted to everyday Americans. Yeah, I suspect that is closer to the mark.

Why they were convinced that they needed armed security is a mystery, as I believe they were largely ignored along their protest route. I don’t think there was a single assault. No attempted rapes were reported (I have seen these women. The ten-foot pole rule applies). Why hire armed security to protest other people having access to arms for their own personal security?

I’m sure the folks watching as the pussyhats marched around NRA headquarters with their armed security did appreciate the hypocrisy. And that’s why we say you simply cannot make this stuff up! 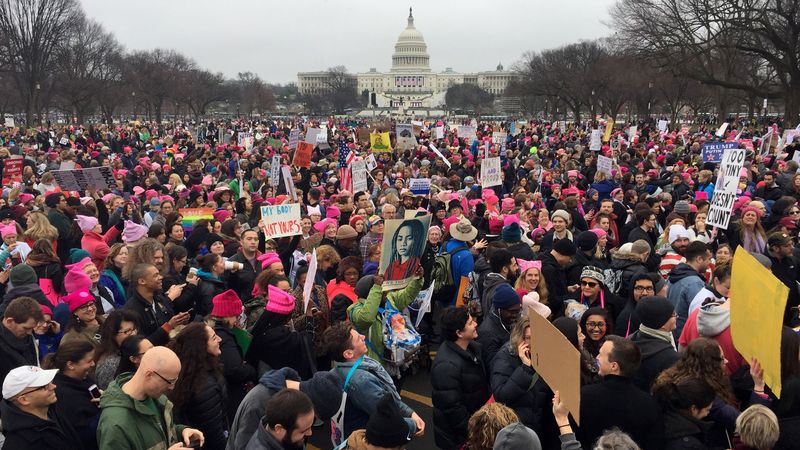 Organizers of the “Women’s March” and Michael Bloomberg’s gun control lobbying group Everytown are participating in an anti-National Rifle Association rally today. They are currently walking from Fairfax, Virginia to Washington D.C. as part of the resistance movement. Their main arguments?

-Loaded guns under beds are bad

-The NRA is full of bigots

But what’s a leftist rally without a massive dose of hypocrisy? Turns out a number of Women’s March leaders are walking with armed security and protective vehicles.

Also #NRA2DOJ: Men with guns are protecting the leaders of the @womensmarch

Leftist agitators like Linda Sarsour and Shannon Watts hiring armed protection while demanding the rest of us turn in our guns into government bureaucrats is nothing new. Watts does the same every time she shows up to protest at the NRA annual meeting. Former NYC Mayor Michael Bloomberg, who pays Watts millions to take away the Second Amendment rights of everyday Americans, doesn’t go anywhere without his security detail.

Meanwhile, these are the men behind the Women’s March.