Photo, above: I’m not sure what the sign behind David Brock says, but my imagination tells me it is unprintable.

More dirt on the Clinton camp in WikiLeaks’ latest Podesta dump. In one email Clinton soldier Brent Budowsky sent the email pictured below to campaign chairman John Podesta complaining about what he calls the “plan” of fellow Clinton lackey David Brock to rely on black voters being stupid. The controversy centers around an email sent to Podesta regarding a Bernie Sanders campaign ad that featured “many black faces.”

Oops! Democrats have always taken the black vote and black Americans for granted. The black voting bloc has always been expected by Democrat candidates, despite the Democrat Party’s long history of gross racism.

One has to wonder how much damage has been caused to that relationship by the WikiLeaks revelations over the past few months. No wonder Hitlery wants to drone Assange! 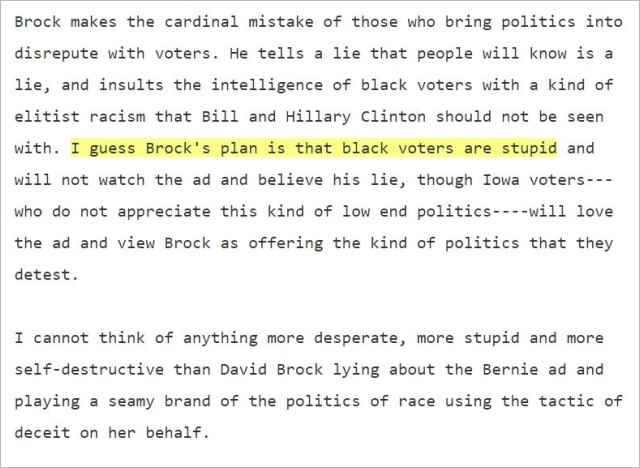