As I reported last night while WikiLeaks was uploading it latest document dump to the web, provided by infamous hacker Guccifer 2.0, following are a few of the docs hacked from the DNC.

Will this be the magic bullet that finally takes down the campaign of the Wicked Witch of Benghazi and damages the Democrat Party beyond redemption? We can only hope and continue to publish what we find.

This appears to be, by far, the most damning information to date, and we are only getting started sorting through the massive document dump.

The following email demonstrates just how brainless the Democrats are. Admitting that they knew their cybersystem had been compromised, they emailed out passwords to employees and others anyway.

Wow! That’s like saying, “There is a shootout in front of my house. Bullets flying everywhere! Gotta’ run. I need to mow the front lawn.”

Email from Colin Powell to big Democrat donor, Jeffrey Leeds, emailing what he thinks of Hitlery. “No one likes her and the criminal thing ain’t over.” 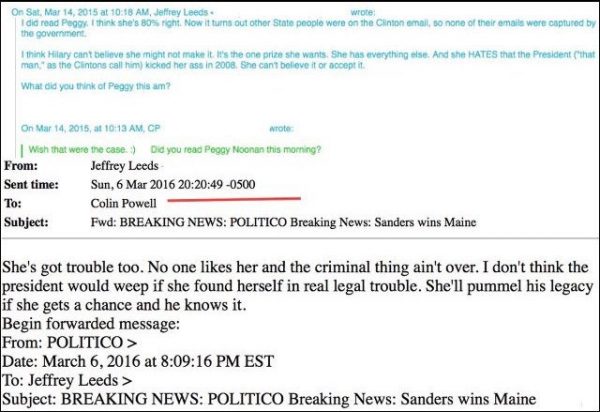 Democrats strategizing on staging protests. This is the level of scum we are dealing with. They stage protests to make their targets look bad.

DNC: "when our allies screw up and don't deliver bodies in time…"
Dems stage-manage "protests" for TV. #dncleak pic.twitter.com/xG0iB7mxIA

Pay to play. This one could be a bombshell. Clearly selling ambassadorships and other high profile positions to donors in return for payola.

Here is what $3.5 million will buy a Democrat donor. Nice gig!

Huma Abedin giving Hitlery “credit for inspiring the ‘peaceful’ protests” that resulted in the deaths of four American heroes, blood that is on her hands and for which she is directly responsible. Note that the date of this communication is the same day the Wicked Witch of Benghazi told the families of the four dead heroes, over their coffins, that the attack was the result of a video. Apparently Huma and Hitlery are proud of this and find it amusing how well they can lie. Newsflash, bitch – it didn’t work!

And of course no hacking of Democrat communications would be complete without a little election fraud….

We will post more as it becomes available. Investigators are scouring the very large document dump now. This will likely be the most damning information to date.

How much more is out there and how much more can the Democrat Party take before completely imploding?