Everyone knows the globalist plan to deny We the People the right to self-defense via our “legal” firearms. In their view, the rebellious Americans must be prohibited from owning “legal” firearms, lest we have a means of self-defense against their diabolical plans for global totalitarianism, where there are two classes – the wealthy, powerful elite, and the other 99.9% of us, a new caste of low class proletariat. No middle class.

Toting the globalist water is Hitlery Clinton, the Wicked Witch of Benghazi. Although WWB is likely facing serious criminal charges herself, she is running for President of the United States, a scary as hell proposition. And the Democrats, possibly committing political suicide, are apparently letting her do it.

So, the globalist elite have trotted out WWB to scare the bejesus out of those stupid enough to fall for it, and believe me, there are millions of Americans just that stupid. The real problem with their complete stupidity is that the stupid also enjoy the privilege to vote, and Hitlery and her globalist, Marxist pals know it. 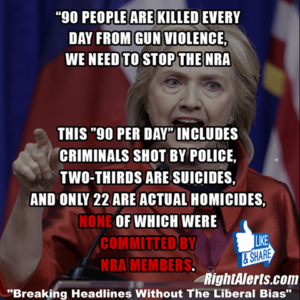 Hitlery’s lie du jour is designed to get the stupid to vote her into office on the platform of taking the guns away from honest, decent, law-abiding Americans, in total violation of the Second Amendment to our Constitution. And, again, there are plenty of American voters stupid enough to do that.

WWB’s latest campaign mantra involves the 90 Americans a day who are killed by gun violence. Of course she conveniently leaves out the fact that the vast majority of those killed daily by guns are suicides. Many others are police shooting perps, and then there are 22 of the 90 which are actual homicides. Again, conveniently left out of the equation is the fact that most of those homicides, nearly all I suspect, are murders occurring in our inner-cities with “ILLEGAL” firearms! In fact, 22 gun murders a day in our inner-cities sounds like a slow day. Chicago, alone, often records 10 or more in a weekend.

This is the ruse the globalist Marxists are using to steal your guns. It is obvious, just from the statistics, and the globalists are well aware of them, that “legal” guns are not the problem. Thus, they have another motive for violating our Constitution and taking your “legal” guns. It can only be to leave you defenseless. They know their smoke and mirrors fear ploy is just bullshit they are shoving down the throats of the stupid. We have between now and November to see if they will get away with it. The key, in my humble opinion, is educating and awakening the stupid. Good luck with that!

Taking “legal” guns away from law-abiding Americans will never stop even a small amount of homicides committed by those who own or will buy an illegal firearm. In fact, it will make the non-issue much worse. Taking “legal” guns away from honest people will, obviously, make them sitting ducks for armed robbers, burglars, and other nefarious characters who will NEVER surrender their illegal guns.

In former Secret Service agent Gary Byrne’s book, Crisis of Character, Byrne describes an incident he was privy to during which Hitlery hurled a vase across a White House room, giving Slick Willie “a shiner, a real, live, put-a-steak-on-it black eye.”

Who needs a gun when you can chuck a vase with major league precision and velocity, right? No wonder WWB doesn’t favor guns. She doesn’t need them. She can kill a deer at 100 yards with a beer bottle.