Whiny baby Fox News complains after being boycotted by Donald Trump for unfair treatment. In response, Fox validates his claim by bashing him even more

I have not watched Fox News since their disgraceful behavior on the night of the first GOP debate. I don’t miss Fox a bit, and I will never watch Fox again. CNN is actually a pleasantly surprising alternative. They have moved considerably to the right, undoubtedly to capture market share that Fox has been hemorrhaging since former Foxaholics like myself have stopped watching the clearly anti-Trump network.

Fox’s surprising anti-Trump slant began long before the first GOP debate. Typically sugar-sweet girl next door, Dana Perino, morphs into Hillary Clinton at the mere mention of Trump’s name. Charles Krauthammer has been slamming Trump, who he calls a “rodeo clown,” since before he could walk…. or couldn’t. So ecstatic was Krauthammer after the first debate over what he erroneously perceived as a dismal performance by Trump, I fully expected the pretentious faux intellectual to jump from his chair and strut the lederhosen.

Donald Trump is a ratings magnet. He should be charging networks for his interviews. Any show that has him on as a guest enjoys record ratings, as did Stephen Colbert’s Late Show on Tuesday night, setting a new ratings record for the show.

Fox has been exposed, and now they are crying about it. 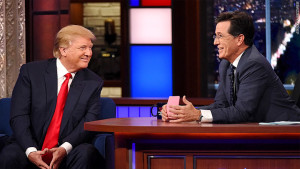 .@FoxNews has been treating me very unfairly & I have therefore decided that I won't be doing any more Fox shows for the foreseeable future.