VIDEO: Wow! This is HUGE! The Pentagon just announced that it will shoot down Russian aircraft flying over Syria, where they have every right to fly and have presented no threat to US forces. 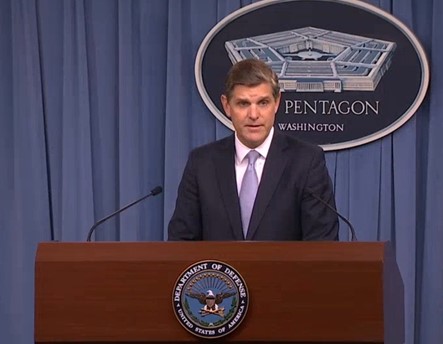 Welcome to Bizzarobamaworld! Barack Hussein, through his DOD press secretary, announced in a Monday press conference that he is implementing a no fly zone in Syria that Syrian and Russian aircraft are not permitted to fly within. This is HUGE!

Pentagon Press Secretary Peter Cook (there’s a punchline there somewhere) was careful not to label the “no fly zone” a “no fly zone.” Instead he kept repeating that US forces will protect “coalition forces” and “partnered operations on the ground.”

From what? Neither the Syrians nor the Russians are going to attack US or coalition forces. So where is the threat that justifies this bizarre no fly zone.

Listen at the 5:20 mark in the video below as a reporter asks Cook directly, “Are you prepared, is the US military prepared, to shoot down a Syrian or Russian aircraft if they threaten US forces?”

Cook replies, “If they threaten US forces, we always have the right to defend our forces.”

Translation: “Yes, we have no problem shooting down Russian aircraft, and we will determine what constitutes a threat.”

In a no fly zone, simply flying through it would constitute a threat.

This is stupid, this is dangerous, and this is textbook Barack Hussein. He should be removed from office immediately. Let Biden run the country for a few months. What harm is that going to do?

In my opinion, Hussein is doing his best to provoke a war with Russia, for the obvious purpose of creating as much global chaos as possible.

This is what I believe Putin’s response should be. Nothing. Putin is smarter than Hussein. Much smarter! Simply don’t fly there. Let Hussein have his way. In a little over two months there will be a new sheriff about to take the reins, and if that is Donald Trump it is a whole new ball game. If that is the case, on January 20,2017 Russia will become a powerful and vital ally, instead of the mortal enemy Hussein has tried to paint them to be.

And can someone, anyone, please explain to me what Bashar al Assad ever did in the first place to deserve being deposed? He was and is a secular leader, protecting sizable Jewish and Christian communities in Syria. Everyone got along just fine in Syria before this terrorist provocation that has turned into a global war.

Let Hussein talk his shit. Ignore and avoid the miserable bastard! In less than five months he will be a skid mark on American history.

From the Ron Paul Institute

Reading between the lines in today’s Pentagon press briefing, a bombshell US policy shift is becoming more apparent: Syrian forces and their Russian partners are being told that conducting military operations in some parts of Syrian airspace opens them up to being shot down by the US military.

Pentagon Spokesman Peter Cook was asked numerous times in numerous ways whether this amounts to a US “no fly zone” over parts of Syria. His first response was vague but threatening:

We will use our air power as needed to protect coalition forces and our partnered operations. …We advise the Syrian regime to steer clear of [certain] areas.

The policy shift was so apparent that, one-by-one, the press corps asked for clarification. Does this mean that the US would shoot down Russian or Syrian planes if they attacked any US-backed partners even if they were engaged against Syrian government forces? Are those “coalition forces” and “partnered operations” receiving US protection against attack from the air always in receipt of that protection, or only when they are actively engaged in military operations? What are the rules of engagement?

There was no clear answer from the Pentagon spokesman.

“Is this a ‘no-fly’ zone, then,” asked another reporter. It’s not a “no-fly zone” Cook responded.

Another journalist tried to get some clarity:

How is telling Syria not to fly in certain areas not a ‘no fly’ zone?

“Call it what you will,” Cook eventually said.

Another journalist asked, “Do you think the Syrian regime has the right to fly over its own territory?”

Same answer: “We will use our air power as needed to protect coalition forces and our partnered operations.”

The anti-Russia rhetoric in Cook’s comments was inexplicable as well. According to the Pentagon spokesman, the suffering in parts of Aleppo is not due to its ongoing occupation by al-Qaeda’s Nusra Front, but rather by Russian and Syrian government attempts to expel Nusra from the city. Cook’s explanation defied logic. Russian actions in Aleppo are…

…only adding fuel to Syria’s civil war and [do] nothing to degrade extremist groups, which is Russia’s original reason for its military intervention in Syria.

The sentence only makes sense if one accepts the premise that al-Qaeda in Syria is not an extremist group, as it makes no sense to argue that bombing a certain group does nothing to weaken that group. Unless the Pentagon is suggesting that Russia and Syria are only bombing the civilian population, presumably for fun?

Whatever the case, this is a trial balloon. If this de facto “no fly zone” becomes a fact on the ground, it will be expanded beyond Hasakah and may be a US last-ditch effort to prevent Syrian government forces, aided by Russia, from taking back Aleppo and thus breaking the back of the foreign-backed insurgency.

This is endgame time.