VIDEO: Watch Fox News hosts crack up at Debbie Wasserman Schultz’s claim that she was not booed off stage during the DNC, but rather those were cheers from her “enthusiastic supporters” 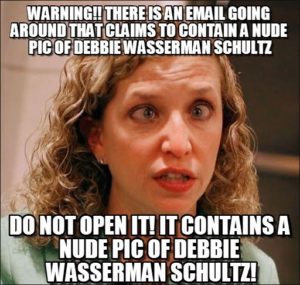 Debbie Wasserman Schultz is claiming that the booing in the room as she took the stage at a breakfast with the Florida delegation during the Democrat National Convention were actually the cheers of her “enthusiastic supporters.”

LMAO! Watch Fox and Friends hosts crack up over this claim….

Following is the video of her speech which was constantly interrupted by the booing of Bernie Sanders supporters and other Democrat supporters who believe her unethical, immoral collusion with the Hitlery camp to engineer Hitlery’s coronation as the party’s nominee was disgusting.

“Enthusiastic supporters,” claims Schultz. Yeah, right, so enthusiastic she had to be escorted out of the room by security. Listen at the end as the “goodbye” chant is sung for Schultz as she leaves the room. The chant is used during sporting events when fans of the winning team taunt the losing team with the fact that they have been beaten. In Schultz’s case they are declaring that she will be beaten in her November reelection bid, presuming she makes it past the primary, which is no guarantee.