Liberal weenie reporters welcome President Trump home not with congratulations, but with snide remarks about how he drinks water

An understandably tired President Trump is home from a very busy and productive Asian tour where he secured over a trillion dollars in business from Asian trade partners. That is a one trillion dollar direct boost to the US GDP.

Liberal weenie reporters welcomed the President home not with congratulations on a job well done, but rather with snide remarks about his need for a sip of water in the middle of his press conference describing his fruitful trip.

Had that been Barack Hussein at the podium giving the very same briefing on a one trillion dollar boost to the economy, reporters would have lined up to perform oral sex on him. 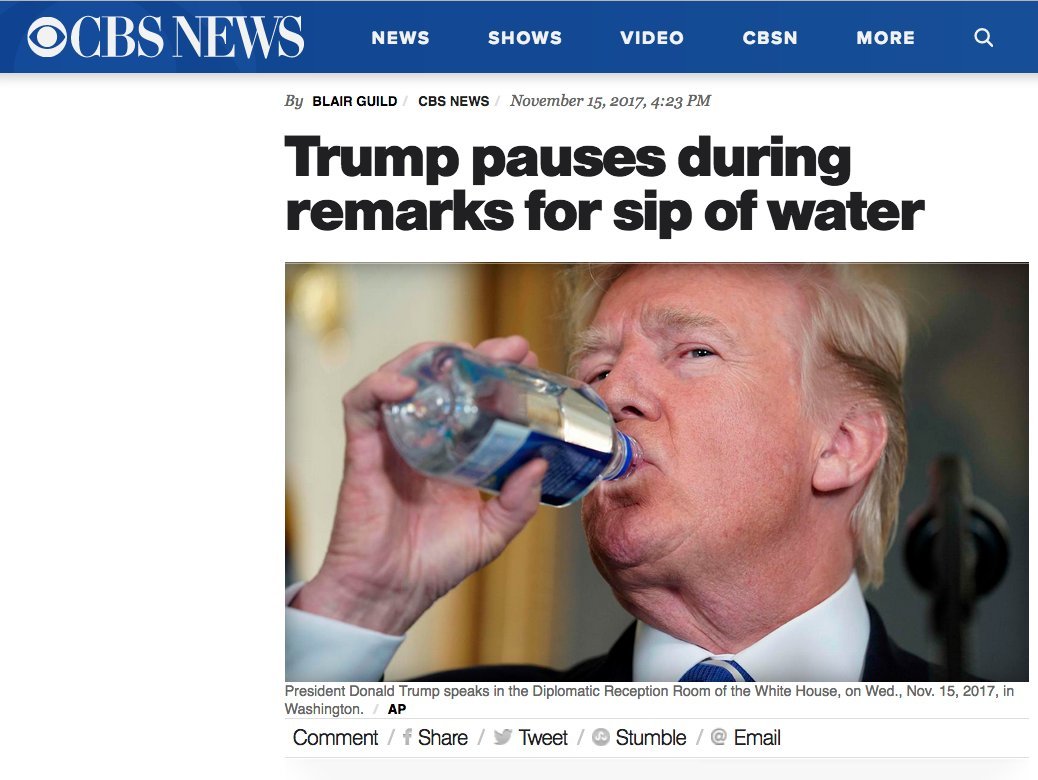 .@POTUS stops mid-speech to take a sip of water. He can’t find the water bottle, but the press helps him out. @FIJIWater pic.twitter.com/jh54qBJrLw

Wow ! President Trump sure has a hell of a nerve being a human being drinking water ! Are you ppl for real ? 7 News is nothing but a joke !

President Donald Trump was lambasted on Twitter Wednesday for taking two sips of water during his first speech back in The White House since he departed two weeks ago for his Asia trip.

Just 10 minutes into his speech on foreign policy, Trump paused and looked under his lectern for water. “They don’t have water,” he said. “That’s ok.” The president then saw there was a bottle of water next to the lectern, paused, and took a sip of water.

Within seconds, Twitter erupted. Hundreds of reporters tweeted about Trump having to drink water in the middle of his speech, pointing at the fact he used “two hands to drink a bottle of water.” A CNN reporter called out Trump, saying that it was “SAD!” that Trump “needed 2 sips of water to get through this speech.”

Trump needed 2 sips of water to get through this speech.

The fact that he needs two hands to drink a bottle of water is what really does it for me. pic.twitter.com/uE8Gqodnje