Oh, no! Supersleuth George Won’t has it all figured out. Donald Trump will not release his tax returns because he is doing business with Russians!

Pompous pseudo-intellectual and pathetic beltway wimp, George Will, has it all figured out. He is suggesting that Donald Trump has not released his tax returns because he has been doing business with Russians. That’s right! Russians!

According to The Washington Post, the beltway wimp with the propeller tie, still stuck in the Cold War, declared, “Perhaps one more reason why we’re not seeing his tax returns is because he is deeply involved in dealing with Russian oligarchs and others.”

What!? That bastard. How could he be doing business with Russians?

I am going to make a painful confession here. As a building contractor, I hired Russian subcontractors to perform rather artistic stone and stucco work. They were the best at what they did, and I like doing business with the best. I also used a Russian framing crew on occasion. Amazing workers. They actually never used a crane to set trusses, but rather a 75-year old Russian dude who could somehow hump a 30-foot truss, with a 12/12 pitch to the top of a three-story house…. by hand! I am not kidding. Pardon my digression. 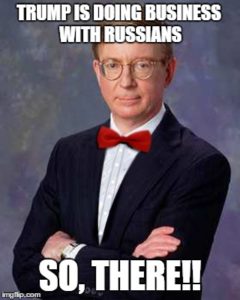 The WaPo’s crack investigative team has discovered other potential theories behind The Donald refusing to release his tax returns….

2. He did not pay any taxes. Well, if The Donald can pull that off, considering his income, I say all the more reason to get the man in the White House. That would be pure genius when you consider he is audited by the IRS every year. That, alone, proves that he pays yuuuuuuge taxes.

3. He has mob ties. LOL! He lives and works in New York City. If you visit New York City for a day and catch a cab or throw a gum wrapper in a trash can, you have mob ties. The so-called mob, you know, organized by those Yankees whose names end in vowels, is mostly legit these days, legitimate businessmen running legitimate businesses their fathers and grandfathers built. Or so my pal, Gino “The Banana” Guacamoli, tells me.

By the way, this lame “mob” theory is the brainchild of Benedict Romney and is being perpetuated by some Canadian guy named Cruz.

Also of note, the author of WaPo’s hit piece (not a mob pun) is Chris Cillizza, so one can only presume he has a mob boss or two up his family tree. To avoid the stigmatic association, I suggest Chris Americanize his surname. “Sileezy” fits well.

4. He donates no — or very little — money to charity. Weak! Donald Trump is famous for his generosity, especially to needy individuals and veterans organizations, but the generosity doesn’t stop there. There is a multitude of evidence to blow this ridiculous theory out of the sewer water Sileezy found it in.

5. He is not as rich as he says. Arguing that The Donald may only be worth three billion dollars instead of the ten billion he and many others claim is a stupid argument. Three billion, ten billion. So what? who cares? One thing is certain, the Trump organization is yuuuuuuuge, owns and operates incredibly expensive real estate holdings across the globe, and has thousands of people on the payroll. Trump travels on his own private, customized jetliner, is putting up hundreds of millions of his own dollars for the campaign, and is, by all appearances, doing damned well!

Some people believe that having a net worth of ten billion dollars means having ten billion dollars in the bank. People who believe that are typically broke. The bulk of Trump’s wealth (net worth) is in real estate equity and is not liquid. He can convert as much of that equity to liquidity whenever he wants, so he can live any lifestyle he chooses, and he chooses a gold-plated one. Fine with me.

It is understandable that their would be varying estimates of Trump’s wealth, as it involves primarily real estate assets, and appraisals are subjective and their bottom-line values are often all over the map. The Trump Organization consists of over 500 profitable companies. We needn’t worry about the man’s net worth. 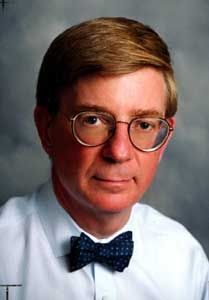 Are you seeing a theme here? “The Democrats will skewer him 24/7 over this.” NO MATTER what is in Donald Trump’s tax returns, the Democrats are going to attack it and sensationalize it. The Democrat Party’s official communications division, aka the mainstream media, will pile on with around the clock wailing and hand-wringing coverage….  “Look at Donald Trump’s tax return. He is a scumbag!”

There is absolutely NO requirement for a presidential candidate to release his or her tax returns, and doing so is STUPID (Benedict Romney). It only serves to give the Hypocrats and media tons o’ ammo. Donald Trump is much smarter than that.

To Hitlery Clinton…. Donald Trump emailed you his tax returns. Didn’t you get them?