In a new poll (below) published by Huffington Post, Donald Trump has rocketed to the front, now leading the field of GOP presidential hopefuls.

As I listen to the talking heads on television news, even Fox, amazingly they are all saying the same thing…. with an all-knowing chuckle: “Trump is NOT going to get the Republican nomination.” Many yucks.

Really? What crystal ball are you self-appointed geniuses using? What are you going to say if and when Donald Trump is 20 points ahead of any competitor in the field? Will you still be so smug, chuckling when you mention Trump’s name, or will you do the honorable thing and find a job washing dishes?

Are you wagering on your belief that Trump is an outsider and and thus the establishment GOP will never allow him to become its candidate? Do you believe they can do that? What if there is such a clamor of support for Trump amongst conservative Republicans (as there is) that the GOP simply cannot ignore it? What are they going to do, go against the majority of conservatives, signing the death warrant of their own party, or will they be forced to get in line and promote Trump every step of the way? If they want to survive they will have to get in line! Snickering at Donald Trump as a less-than-serious candidate, or any candidate who is leading the field and has received such massive grass roots support, is STUPID!

1. “Do you support Donald Trump to be the Republican candidate for President?”

2. “If Donald Trump wins the GOP primary, will you vote for him for President?”

Although the polls are still receiving traffic, both are currently reporting over 92% “Yes” votes. And Donald Trump isn’t a serious candidate? 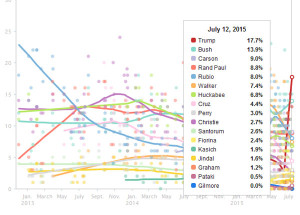